Time to move on to getting this car a single solid color. Which is going to be an interesting challenge seeing as I don’t have a garage or anyway to actually cover the car or the parts I need to paint. which meant the car was going to get painted outside to the best of my ability. This will be my first full car paint so I knew it was going to be a learning experience from the get go. I have painted in the past inside professional paint booths but it was industrial machines and parts.

The color I decided on was a satin black paint. This would allow me to do a single stage paint and minimize the issues that would occur painting the car and parts outside. I picked up 2 gallons of satin black paint from Napa from their PPC line which is an industrial coating that is easy to spray and has a fast flash of time. The flash off time is the time the outermost layer dries which prevents contaminants in the paint.  Once the paint has flashed then dust and dirt will just sit on top and can be blown off later, it won’t become embedded in the paint. 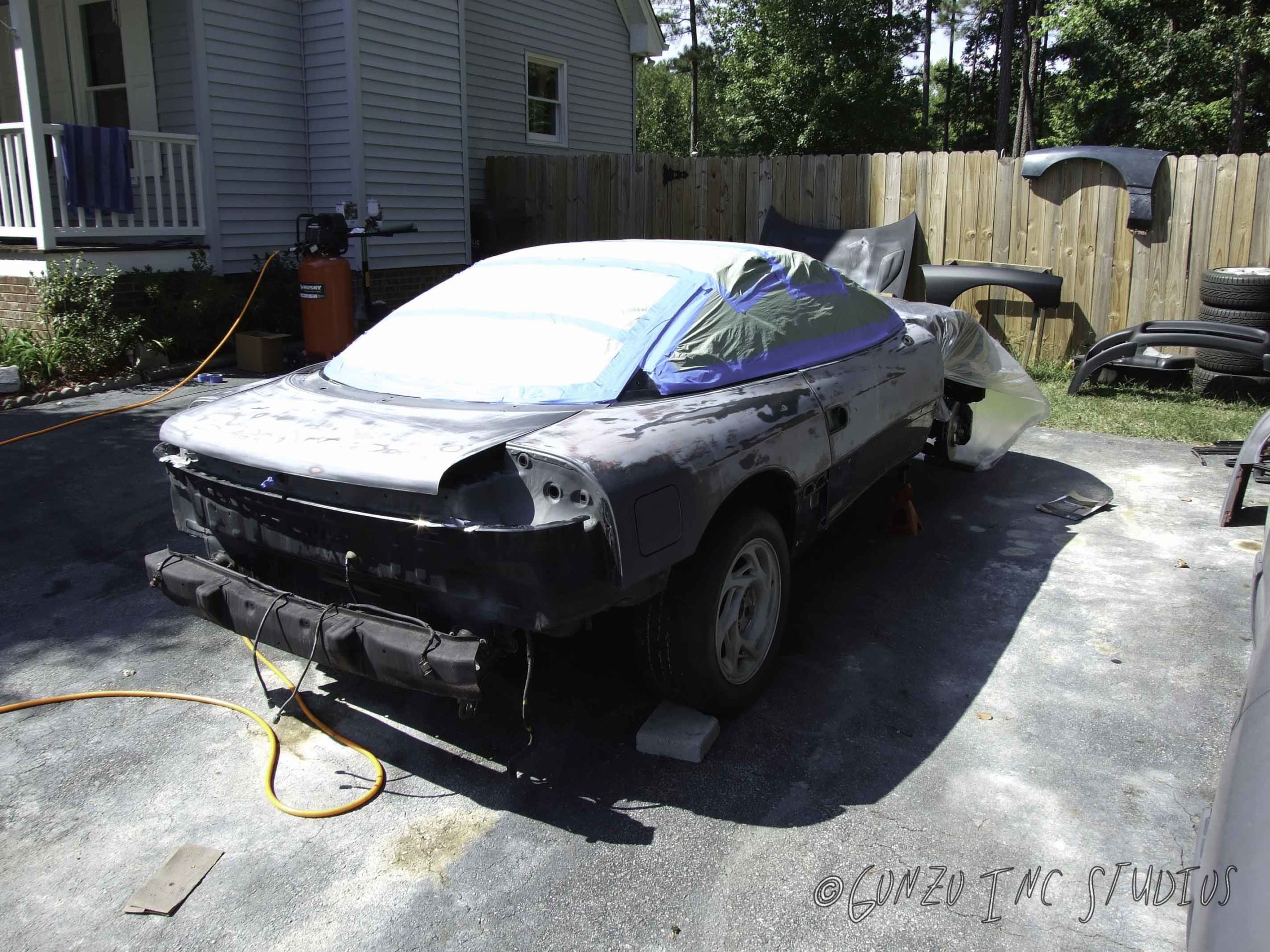 All parts were sanded down with 220 grit smooth, then sanded again with a red scotch pad which is about a 320 grit. The scotch pad helps remove the 220 grit sanding marks. Heavy paint chips were sanded and feathered out. You have to feather out paint chips or it can lead to the original paint chipping off down the road. Body filled used to skim coat some spots for block sanding to straight out any issues in the metal. and then spot putty was used for any minor spots or air bubbles in the body filler. The end goal is to have smooth body lines without any waves of bumps.

While doing the body work I found that the car had rear quarter damage on both sides at some point. I found holes drilled in the door jambs and behind the rear tail lights which were used by a paintless dent removal person in the past to try to work out the dents in the metal. The rear quarters have an outer skin that is not accessible from the inside of the car at all. So the holes are drilled in certain areas to allow the PDR access to the outer skin. These holes were welded back up and finished to not allow water in between the skins.

The inside door jambs and hatch area were the first to be painted, So the doors and hatch were removed and the openings taped off for paint. I was using cheap Harbor Freight spray guns that took a bit to get set up but in the end worked fine with the paint I had chosen.

I left the jambs to dry and began working on all of body panels that are sprayed off of the car. For these I ended up constructing a small enclosure where I could at least control as much dirt as I could getting on the parts. I also built some stands and a rack to hang parts on to be painted.

The workflow was basically get the parts all sanded down smooth, then wiped down with oil/grease remover, tack cloth wipe them down a final time and then spray. Let the part dry about 20-30 min and then move onto the next part. I would hand parts on the fence, my front porch, basically anywhere I could find. At one point half my front porch was covered in painted parts. I really needed a garage….

The compressor was a problem and caused me to have to take more breaks than I wanted to. It was a portable 15-20 callon oil-less compressor, which means it was loud and annoying. it also means that I could only spray really with what the tank had stored, once the pump kicked on it could not keep up with the CFM demand I needed. So I could get a couple parts done and have to stop and wait. I also had to take longer breaks when the compressor got too hot. Compressed air create moisture in the tank which end up in the airlines and in the paint. I had a cheap water separator on it but eventually it got to much and I had to let it all cool down and drain it.

I was slowly stealing the body parts off of the old 92 Stealth as I needed them since the new one was missing pretty much all of the exterior panels and the ones that were present were damaged in one way or another.

The main body was the last thing to get painted. Again everything was taped off that didn’t need to get painted, wiped and tacked down and then I began to spray. I really pushed the compressor on this one but I made sure that it was cool and dry before I even started. Everything was in place and ready to go. Two coats later and the amin body is done.

I think the entire paint process took about a week to get all of the parts painted. mainly due to the circumstances I was in and what I was working with. In the end the paint came out amazingly well all things considered.

Little on the inside It’s running atleast!

Little on the inside