A new house with a garage means I get to finally work inside for a change. What a better way to celebrate than with some new turbo’s and a whole new front mount intercooler setup and pre-turbo pipes.

I stumbled across someone online selling a set of turbo’s with really no details about them. I could tell from the photos that they were not stock 9b’s, something like 13 or 15G turbos but without measuring it was nothing more than a guess based on photos. I snagged them up for like $200 shipped to my door. Once they arrived I measured them and found out they were 13G impellers on stock 9b turbines. This was a nice little bump over the stock turbo’s I had completely run out of steam on.

First thing was the CHRA’s were sent off for inspection and rebuild to Turbo Bay performance. Everything checked out on them so it was just a simple rebuild and balance after everything was cleaned. While the turbo’s were out I cleaned up the housings. The front housing was powder coated chrome. The rear housing was blasted and coated with VHT Flameproof flat black. It’s a spray on ceramic coating and works well enough for the application. It’s mainly there to stop the rust and keep the looking decent. Once the pipes heat cycle a couple times the coating is very durable. So I run them through the powder coating oven a couple times to fast cure them. All new hardware and studs are also installed. 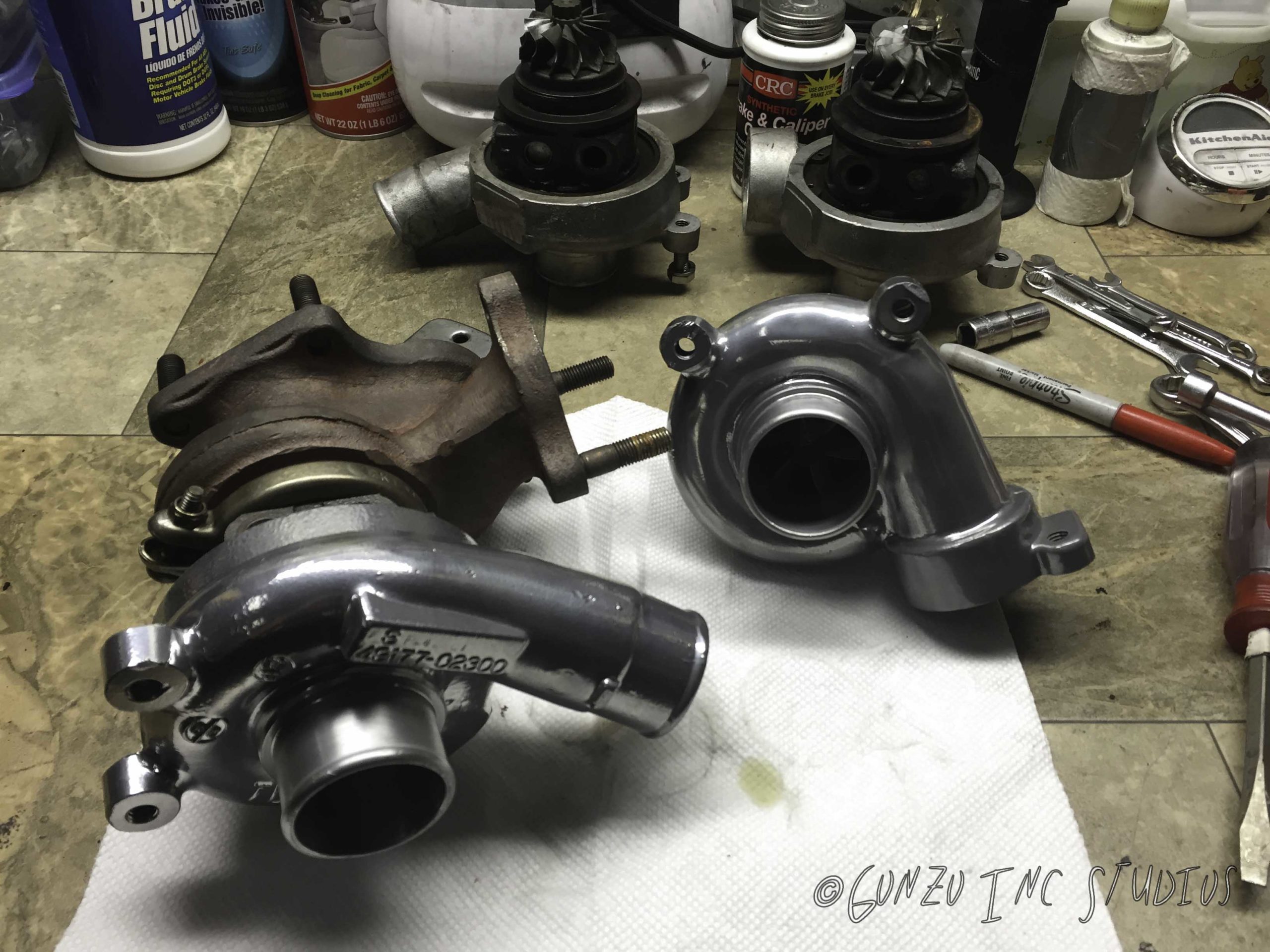 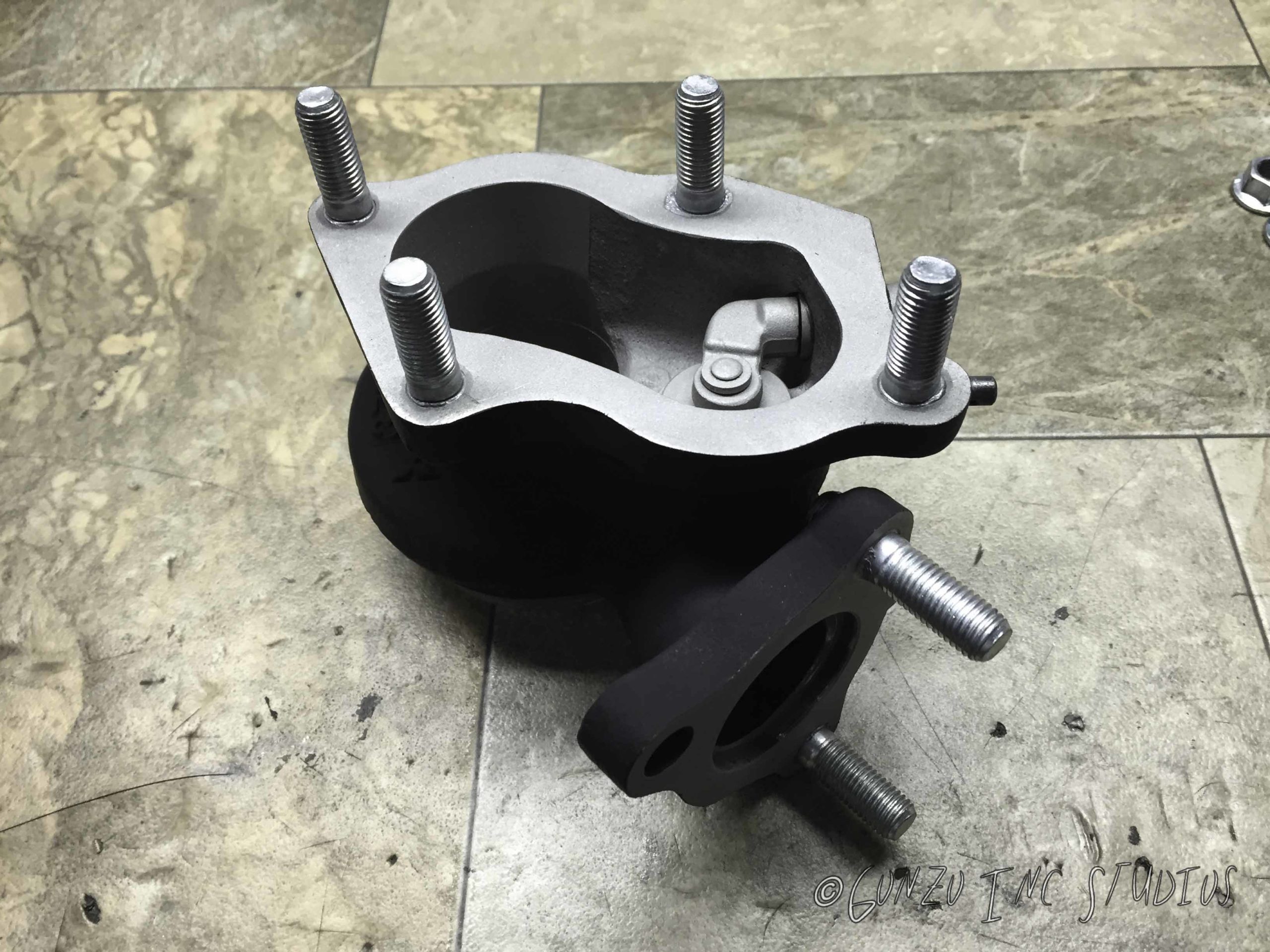 The preturbo’s pipes I got were used and are CX-Racing pipes. They are not the best fitting pipes but are manageable for the relatively lost cost, especially used. They were dinged up and scratched beyond the point a simple polish would have brought them back without needing serious sanding which I was not in the mood for. Powder coating it was then! I decided on a metallic blue coating which is technically a two stage coating. You do a chrome base coat, cure it half way and then splay the blue and fully cure it. Well since it was aluminum I just needed to polish it up a bit and hit it with the blue powder to get the same affect. The powder coats really well and will cover any imperfections that don’t get polished out.

The color came out amazing on the pipes and they ended up being almost the exact same color as the front adjustable cam gears I had first installed. Since most of the engine bay was black or dark colored of some sort, the single blue accent color parts really made things pop. 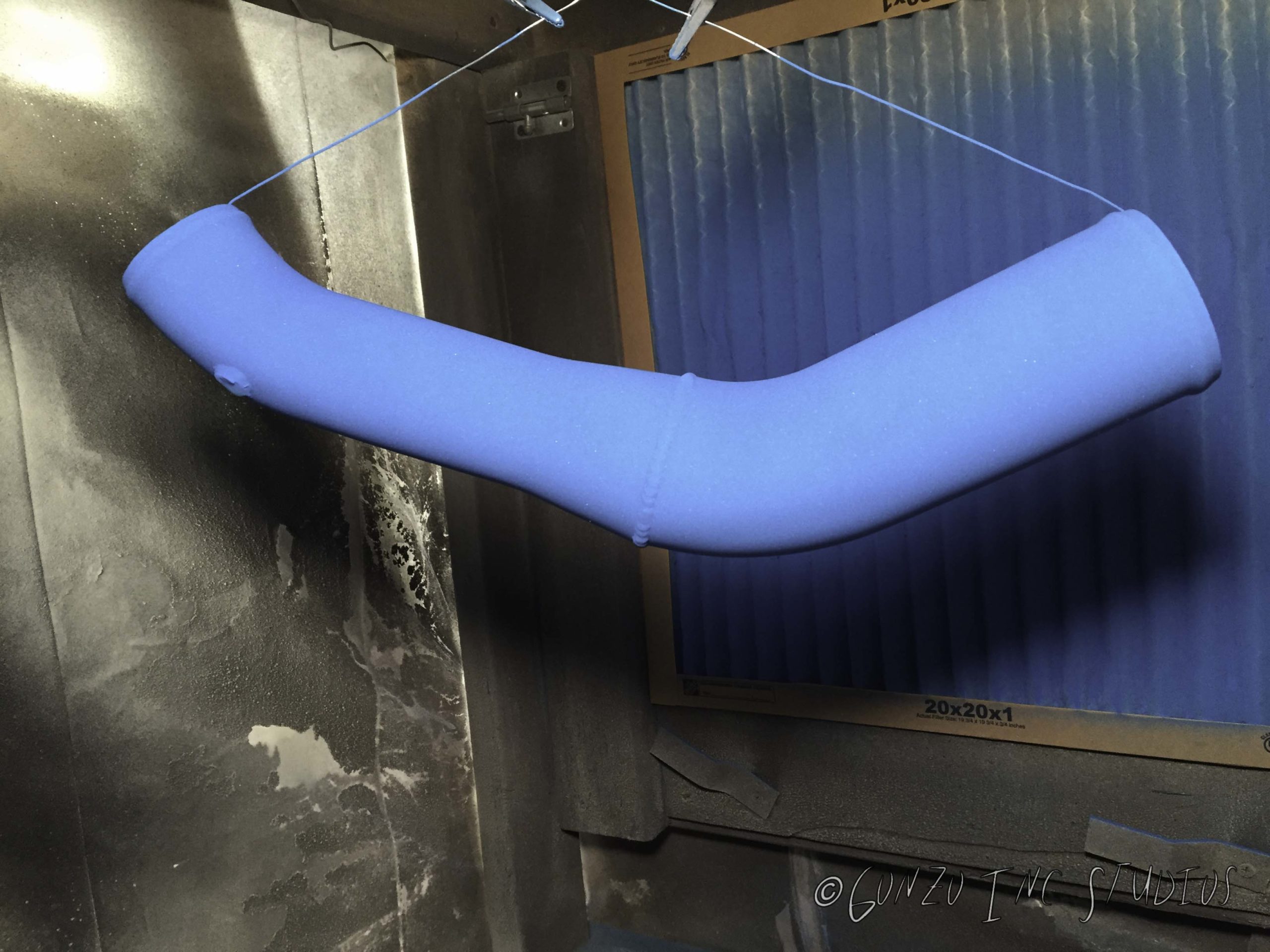 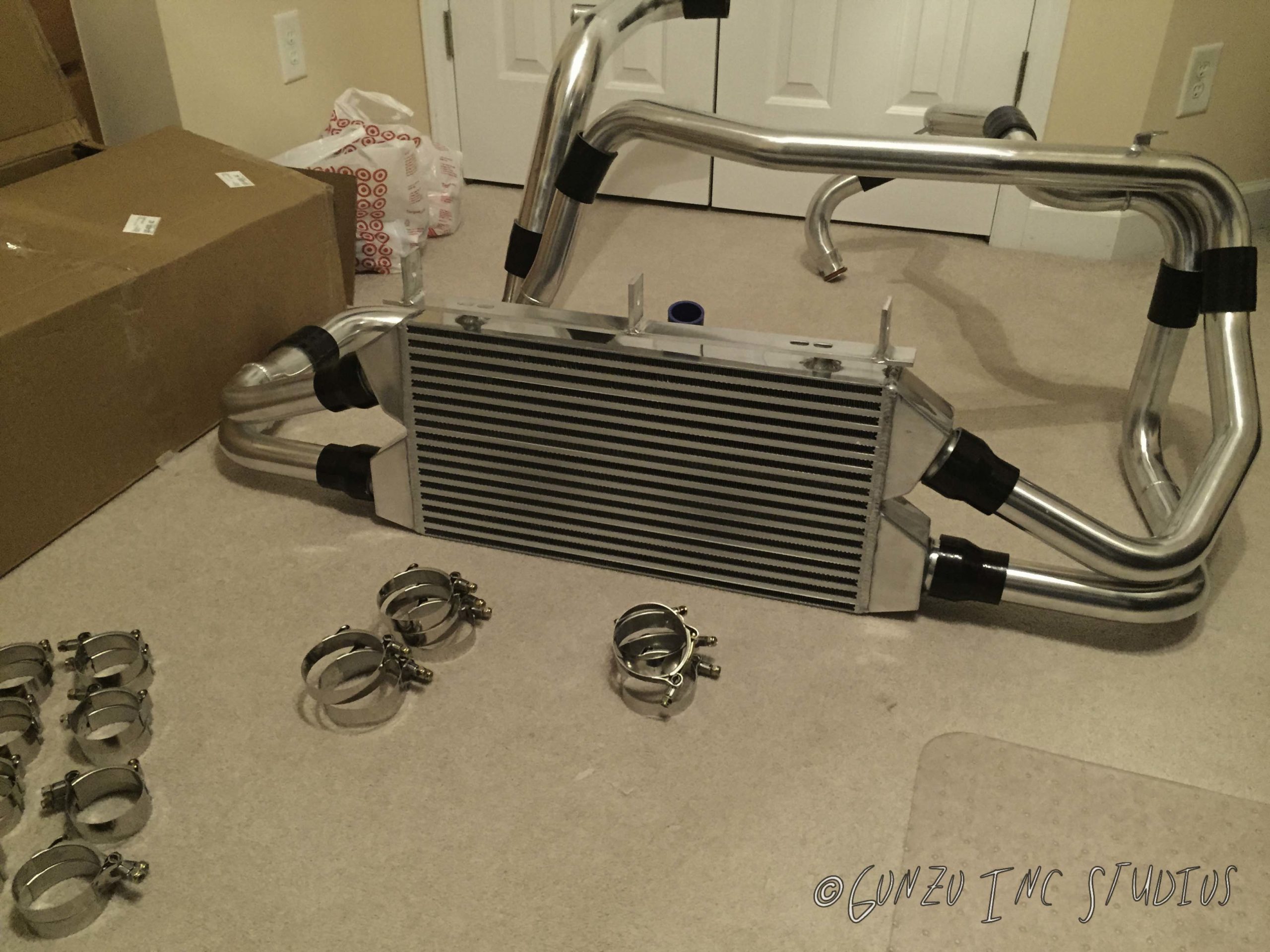 The old front mount kit that I had did cause me some issues due to the design. The old kit was a single core, single in/out that had a y-pipe to merge the turbo pipes right by the oil cooler. This was CX racings single core kit. The problem is that it caused surging due to the two pipes coming into one before the intercooler. The pressure difference in the pipes sometimes caused back pressure which then caused the turbo’s to surge. Which is a bad thing as enough surging could damage a turbo or snap a turbine shaft.

The solution was to move up to the dual core design. This gives each turbo it’s own small intercooler and doesn’t merge until after the intercoolers. So now what happens is that when there is a pressure difference, each turbo now has it’s one intercooler as a pressure tank that it can use to balance the pressure out before the merge going to the throttle body. Balancing the pressure is key as that prevents the backpressure and turbo surging.

The front turbo is the biggest pain since you have to pull the radiator to get to everything unless you have the arms of a 10 year girl. For the rear turbo the plenum needs to come off, which in my case had to be done anyways since I was also adding in 450cc injectors as I needed more fuel for these turbo’s. Disconnect the water and oil lines, unbolt from the manifold and out they come. Oil drain lines need to be swapped over to the new turbo’s. Regardless of what anyone says, use a skim coat of rtv on the oil drain gaskets to make sure they are sealed. These damn things are notorious for springing leaks for no apparent  reason. The oil pan side is not too bad to fix if they leak over time, but the turbo side, you have to pull the turbo’s to get to that side of the drain if it starts to leak. So just save yourself the headache and just skim a little RTV on both sides when installing. 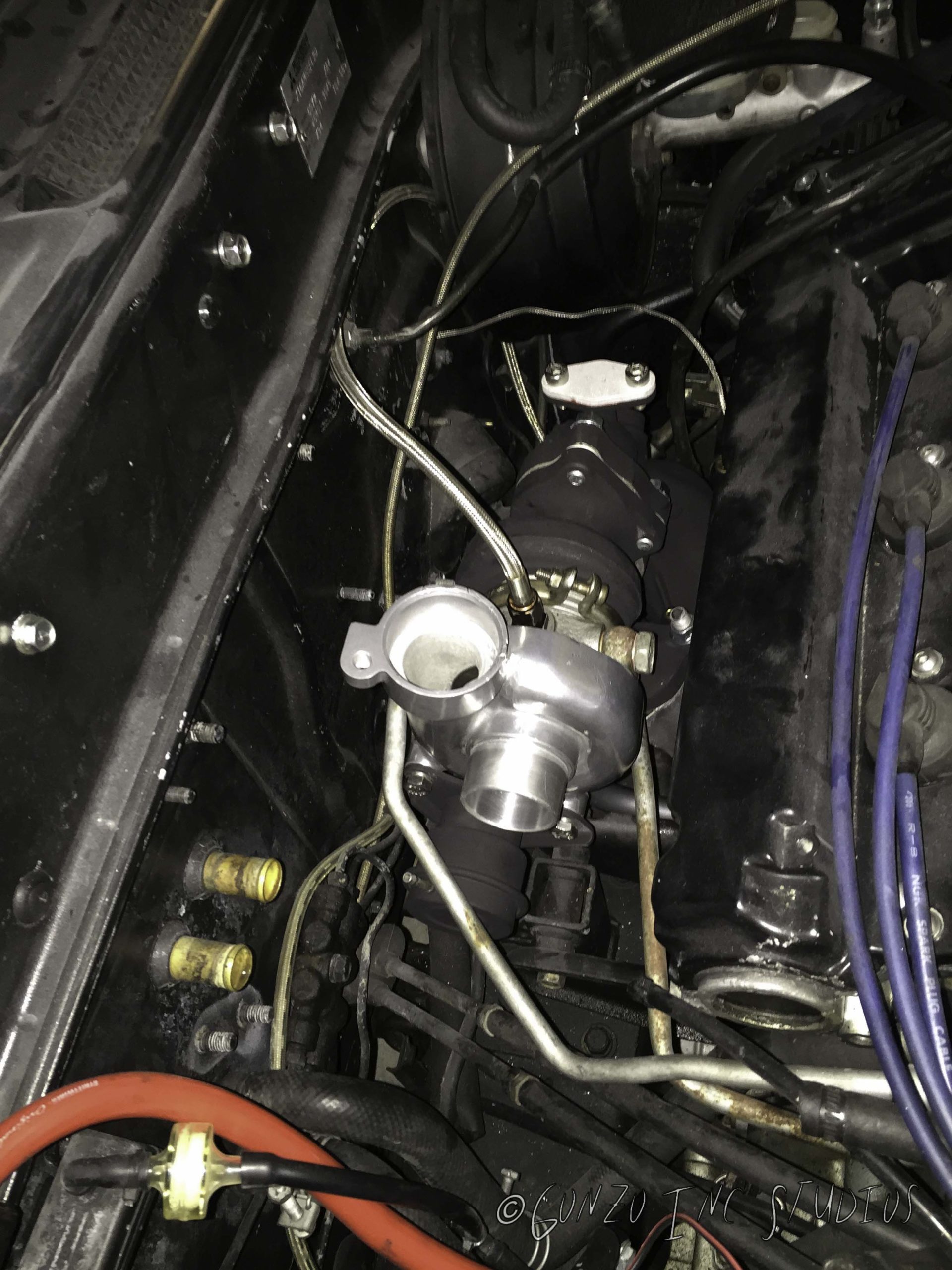 The 98/99 coolant tank I am using was originally used for the Methanol system. After it came out it was converted back to being used as an overflow tank. Due to that tank location I had to custom build brackets to get the intercooler to mount properly under the tank. It was a tight fit and the intercooler is just tall enough to fit. The drivers side pipes are a pain in the ass due to the tight hole they both have to fit through where the AC drier is also located. To make things easier and fit better I had to cut one of the pipes in half and add a coupler to it to allow things to position properly and give everything more wiggle room to fit. With the kit it’s best to just loose fit everything, make adjustments as needed and then tighten everything down.

Buttoned up the engine bay, burped the coolant system and then out on the road to start tuning. I was now able to boost at 16psi all the way to redline without any issues. Car was starting to feel the same as it was on the boosted 10:1 at 12 psi.

I broke the engine Drain Lines