I have never been a fan of the stealth banana wing regardless of the style. It just never fit the body to me. It looked like some Dodge engineer stole the wing off a Talon and bolted it to the back of the Stealth and thought that it looked good. The wing was curved and narrow on the hatch while the rest of the car was wide and long. The car needed to have a feature on the rear to match that wide/long styling. For the 300gt there were many options for rear wing styles that would work and fit, for the Stealth the issue came with the way the rear tail lights curved the rear end of the car. So you would need a wing that would complement that style of curvature. The only style that I personally found that fit this was the stock 99 VR4 wing.

Prices for OEM 99 wings at the time were very high, pushing the $1k limit on the cheap end. Only one company made an aftermarket 99 wing but they were no longer in business at the time I was looking so it was hard to track one down for a reasonable price. I ended up lucking out one day while over at a friends house house picking up parts for someone else’s build. He happened to have a replica 99 wing stashed away that he had to use for and sold it to me for an amazing price.

The hatch on the stealth does not have the holes drilled for the 99 wing. This wing wasn’t even a thought in Mitsubishi’s mind when this car was built so why would it… But I did find that the two outer holes did match up to machine tooling marks on the underside which look to be where the holes for the 3000gt wing would mount. It makes sense to use the same standard measurements across gen/models to keep the tooling simple for production. After marking the center of the hatch with blue painters tape I was able to get the wing aligned perfectly and confirm all of the new hole locations. Three of the 4 holes were easily accessible from the underside of the hatch to bolt into place, one hole was under the outer skin of the hatch so another hole had to be drilled to access the bolt hole location.

Afterwards we started getting all of those holes filled in. I also decided to delete the rear wiper and fill the hole in also. I think the rear wiper on the car is pretty pointless and I can honestly say I have never once used it or needed it. So free weight reduction! The old wing bolt holes were easily welded up just as they were after grinding back the paint to bare metal. The rear wiper hole needed some metal as the hole was too big to just fill. I cut out a small round metal disk and used it as a fill, spot welding it into place until it was fully welded and then grinding down all of the welds flat. Some spot putty was used to fill in any welding pin holes, then sanded flush and primed over. 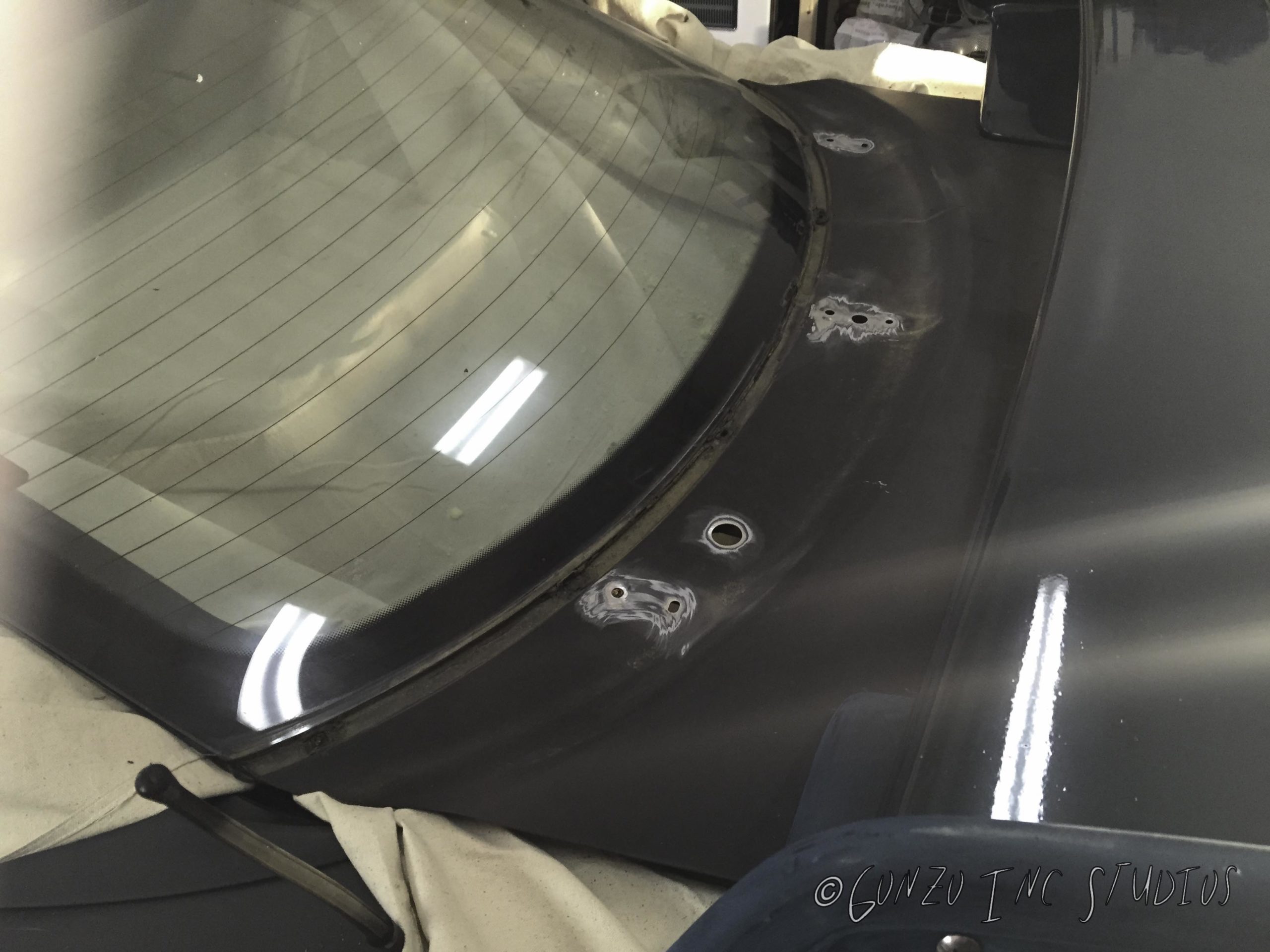 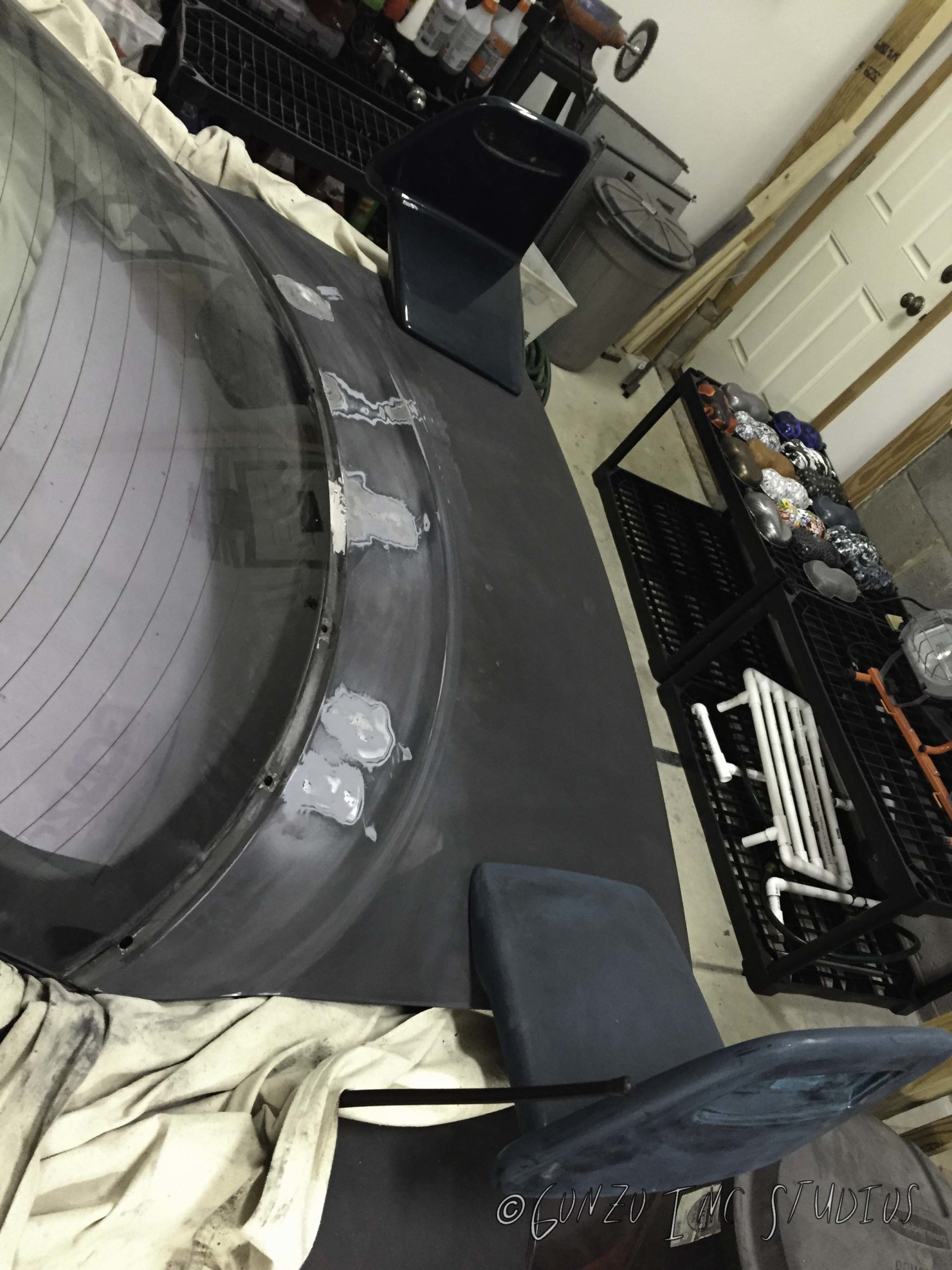 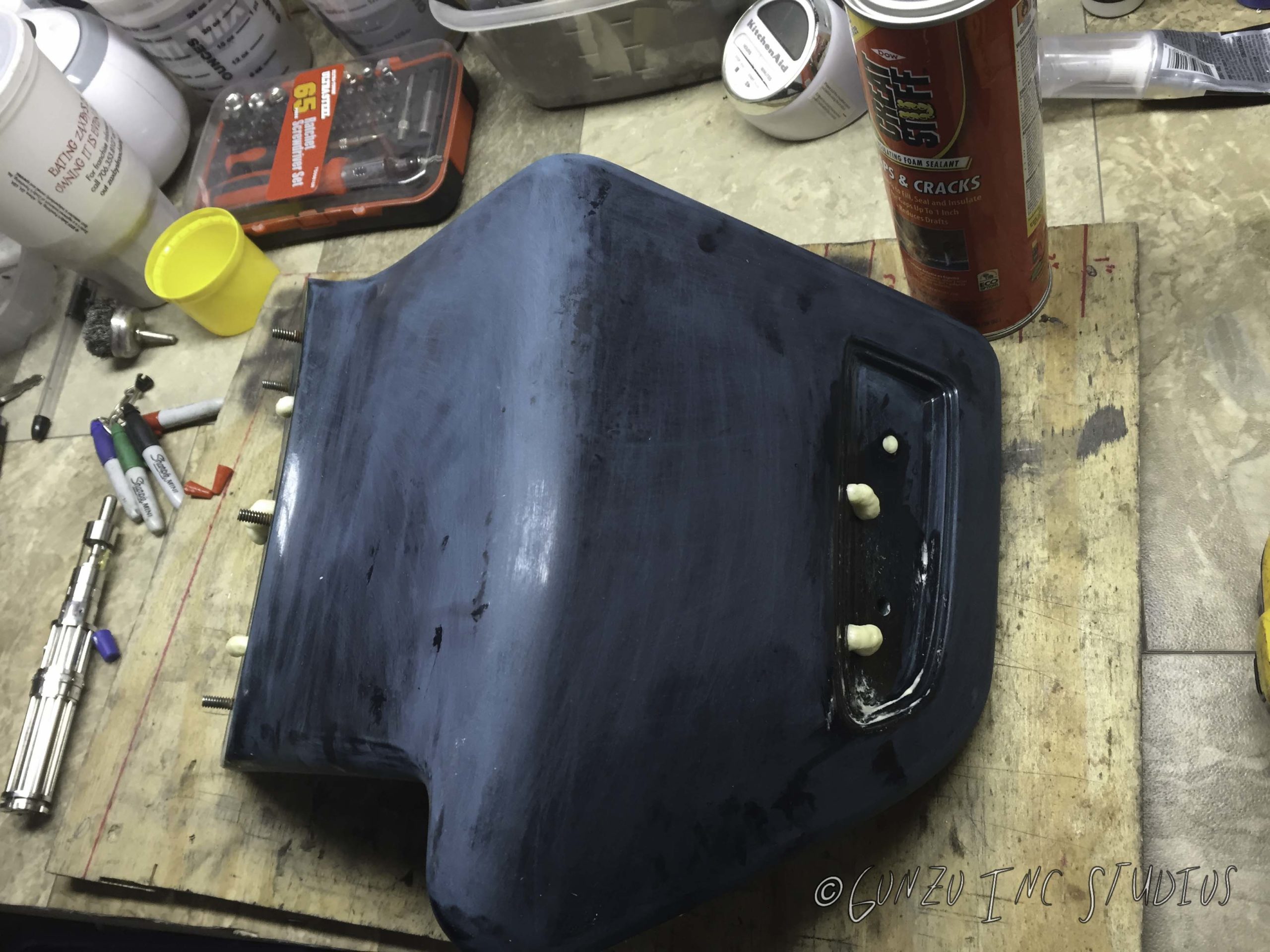 The manufacturer of the wing “Cianci” did have issues with the wings themselves. Basically due to the design and the fact they are a clamshell fiberglass mold made in two parts, it was prone to cracking on the towers as it had no internal rigidity. This wing had some cracking that had already formed that I had to repair. My solution to increase the rigidity of the two towers was to drill some holes in the base and in the areas where the wing bolts and fill the towers with expanding foam. I used a more rigid foam this time unlike when I filled the rear hatch for the stereo upgrade. This really stiffened up the towers a ton and stopped any cracking from occurring from the towers flexing.

With everything ready and prepped it was time to spray. The rear hatch area was taped off since it was the only thing being sprayed and the paint was applied. The two towers were then sprayed. Once the towers were completed and dried I bolted them in place and did a final test fit on the center wing section to ensure everything was fitting together before I sprayed the last piece. Finally it was all done and I think it looked perfect. The tall wide wing perfectly complements the wide and long stance of the rear of the car. The towers inward to outward angles accentuate the taillights and overall it really ties the rear end of the car together. 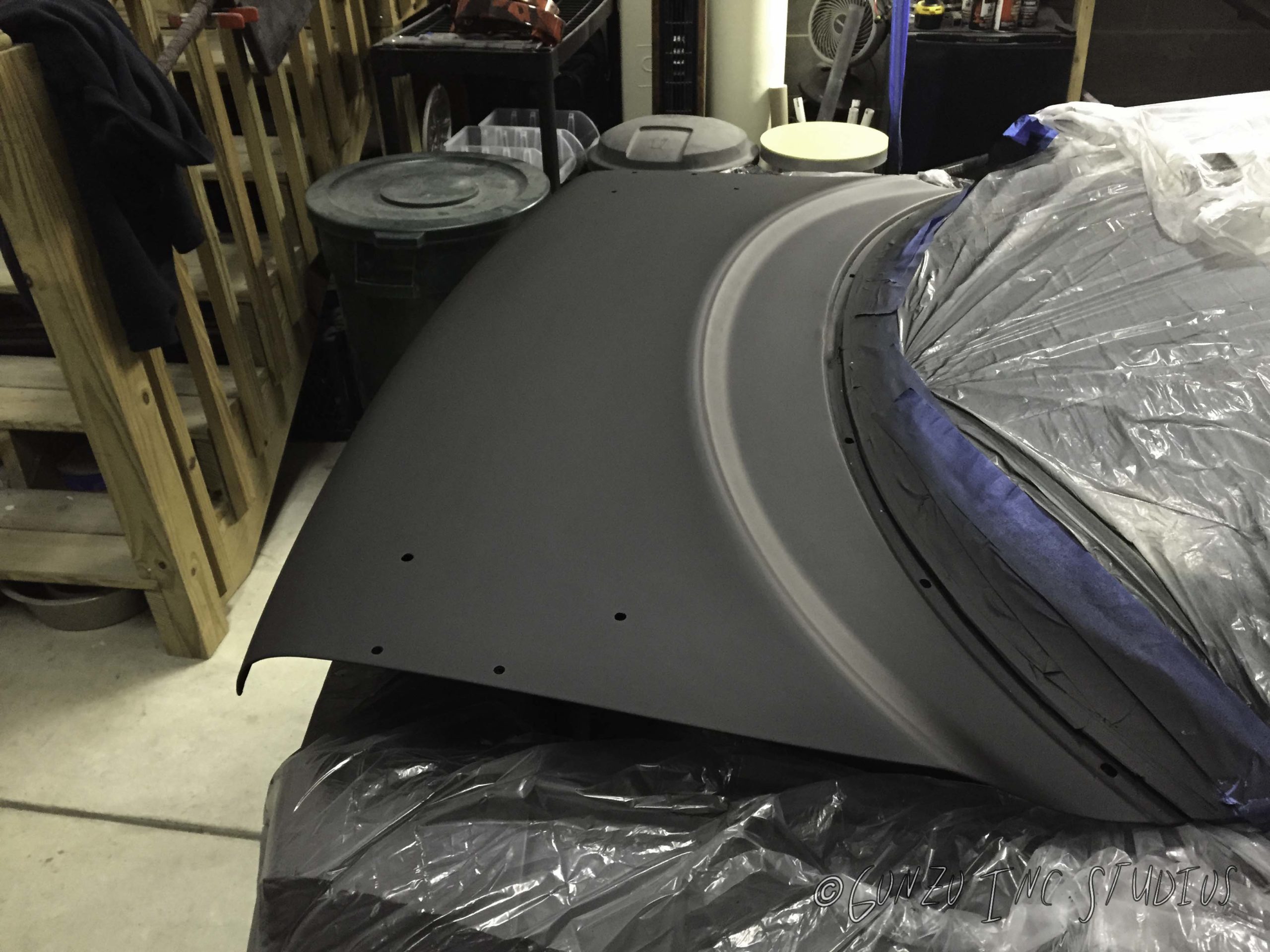 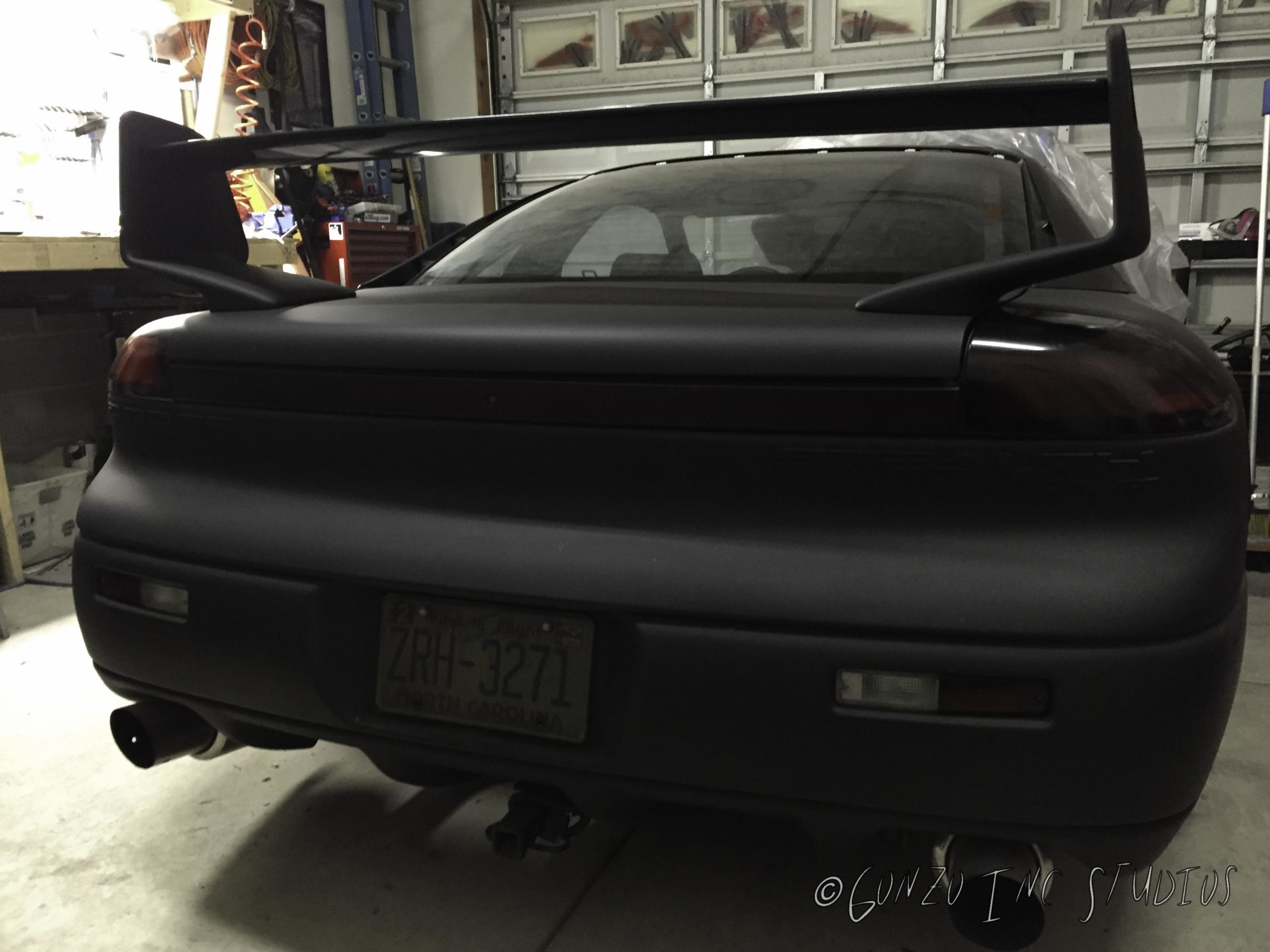 The only issue I ran into was a couple days later of the car sitting in the hot garage, I started to have some trees growing out from under both towers…. It seems that the expanding foam had not fully cured as I thought and found its way out from under the towers. Luckily once the foam is hardened it was pretty easy to remove from the paint and the residue cleaned up with some simple Goo-Gone. 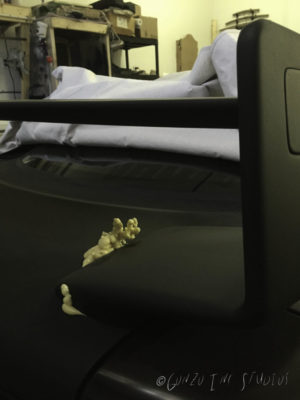