The first thing I addressed on the car was getting it all cleaned up.  I got everything removed from the interior of the car and made note of everything I had and what all I would need to get. the Good thing was I had a complete car that I would get like 90% of the parts from. Most parts from the non-turbo and turbo models are interchangeable, especially things like interior parts.

The plan of attack was to start with the engine bay. Get it cleaned, de-rusted and painted. Then get the engine swapped from the other car. The engine bay had to get done first as their were things like brake lines and such that needed to be done prior to installing the engine. Since I was deleting the horrible ABS pump, I had to route different brake lines for the front calipers and from the prop valve to the brake master.

I was also going to convert the front end from the 1993 with pop-up headlights, to the later gen 99 bumper and glass projector headlights. I already had all of the parts as I had done the conversion on the 92 Stealth already. So the work began by first drilling out the spot welds on the 1993 headlight buckets to get them removed so the laster gen buckets could be installed. I seemed to have lost the photos of that process over the years, Sorry.

With the metal work done on the engine bay it was on to the cleaning the rest.  I started by removing everything in the engine bay that was bolted down. Power washed and heavily degreased the bay. Then wire wheeled and sanded everything smooth. You need a good solid clean base to start with or you’ll just have issues down the road. All of the rust areas were wire wheeled and then a gel rust converter/sealer was applied. Since the metal was pitted a convert/sealer has to be used to seal the pits. If you tried to grind it out you would grind holes into the metal trying to get it all smooth.

A sealer and 2k primer is then applied to the engine bay and left to dry before a once over with a red scotch pad to knock it down smooth for color coat. I used a 1 stage Gloss Black enamel called Finish 1 that I got from my local Napa store. I knew how to paint and have done it at an industrial level in my past. I was not familiar with auto paints so I went with what I could find locally. I was also using cheap Harbor Freight guns to spray and an oil-less 15 gallon air compressor that couldn’t really keep up with the gun. Also add to the fact I was painting outside as I didn’t have a garage to work in.

All said and done the paint came out better than I thought it would. This being my first paint attempt I was happy and this broke the cherry on the resurrection of this Stealth. 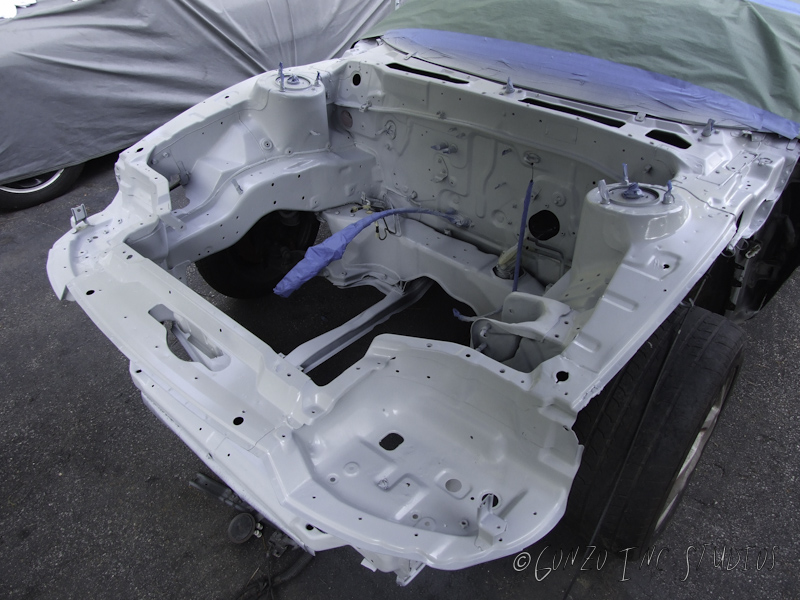 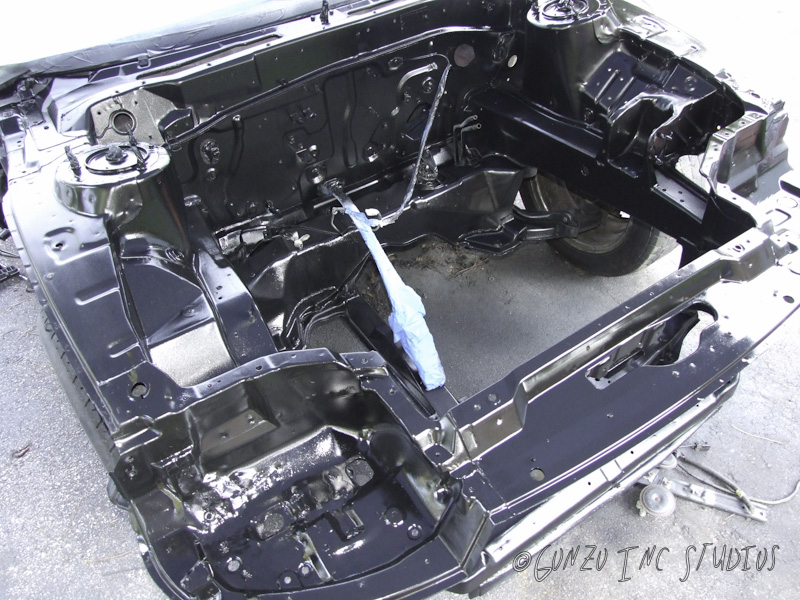 Where it all began…. Lets install some things!