Cut it in half

After getting the Stealth TT all resurrected I was now left with mostly just the frame of the original fwd car. I had pretty much stripped that car as I had swapped all of its parts over to the TT Stealth. That FWD Stealth was the first 3S I had ever owned and for the longest time we thought it was cursed.

I acquired the car through a dealership my father who was working at. The car I was driving was having some issues so we traded it in on the Stealth. Within a year the automatic transmission went out and we dropped probably $2k to have it rebuilt. Not even a year later the engine spun a bearing, So there went another $2k+ out the door. A couple years later the transmission went out yet again! This time I had a brand new transmission installed by the dealership as I was not going to take my chances on another botched rebuild. Needless to say it took the dealership almost 6 months to get everything correct on the car, probably because I went to a Dodge dealership to have all the work done. At that time I was not really working on the cars outside of minor maintenance items.

I had some sentimental value to the car seeing as it was the first one I had ever owned. It was also my test bed for when I did start working on these cars, So there were a lot of mistakes made over the years of ownership. Mainly cosmetic mistakes. I got pulled into the ricer scene pretty bad early on and worked myself out of it when I figured out my own style. The final plan came for the car when I stumbled across some car images only where people had built these custom trailers out of old cars. We may have also been discussing it on the forums at some point also. It came down to 2 of us building trailers at the same time. Ground Zero Performance and Me. GZP got done with theirs like a year before me as I didn’t have a shop much less the tools and materials they did. They built a 3000gt version and I built a Stealth version. Both unique not only in fabrication but also overall design.

I started out with an overall idea of what I wanted to accomplish and what my skills and tools would allow. I didn’t have any real metal fabricating tools outside of some hand tools, a grinder and a cheap 110v flux core wire welder. First step was to cut the car in half since I was only using the rear of the car. I still tell people today that I kept the trouble-free part of the car. The top of the car was already cut as I had started on a custom targa top conversion on the car but it was never completed. Only the lower frame and floor pan needed to be cut. I cut as far out as I could to be sure I had enough material to work with in the end. Had to really support the car under the cut area to minimize flexing when the car came apart to no bend/twist anything. The front half was moved out of the way and eventually sent to the scrap yard once any usable part was removed. 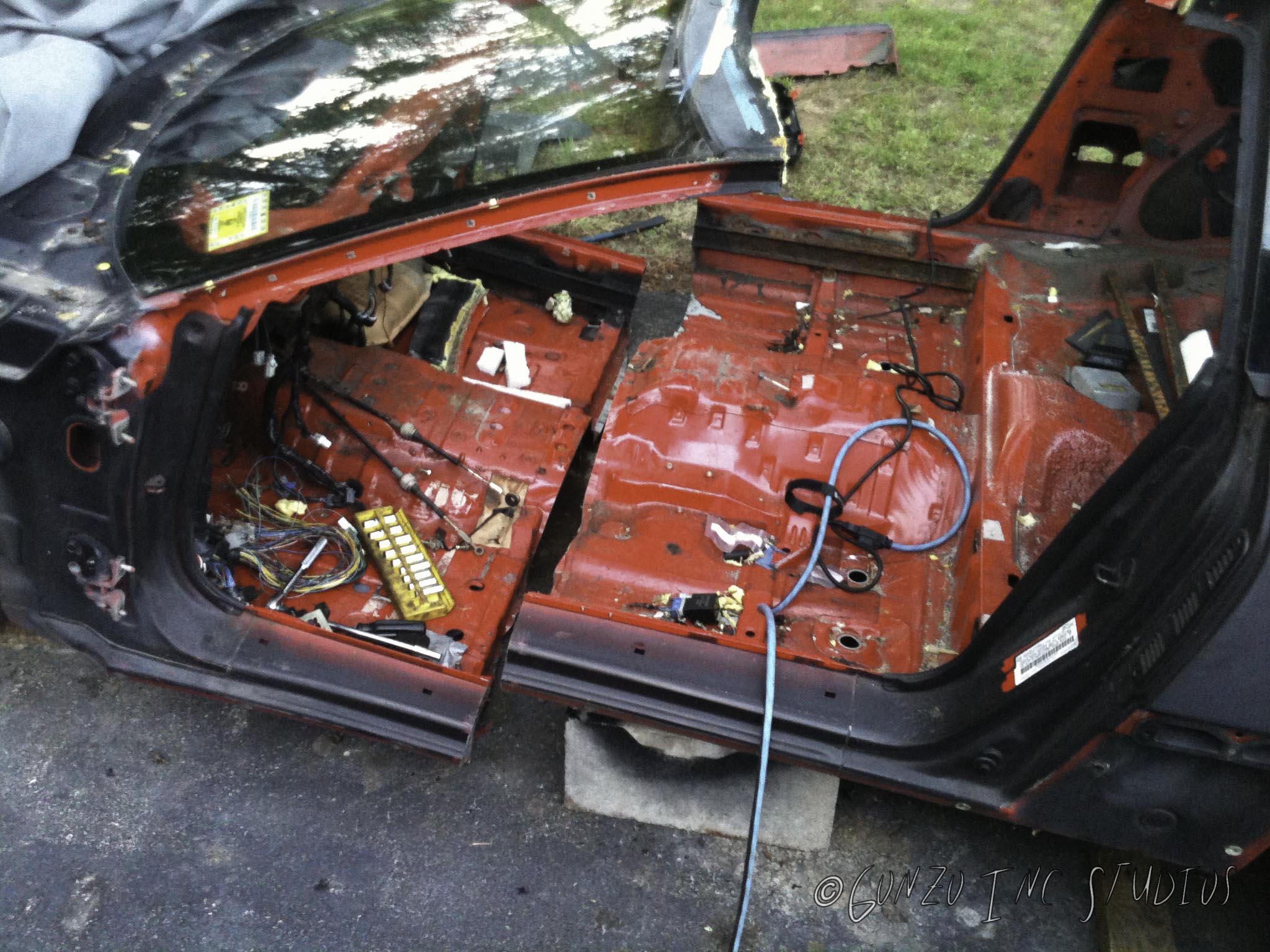 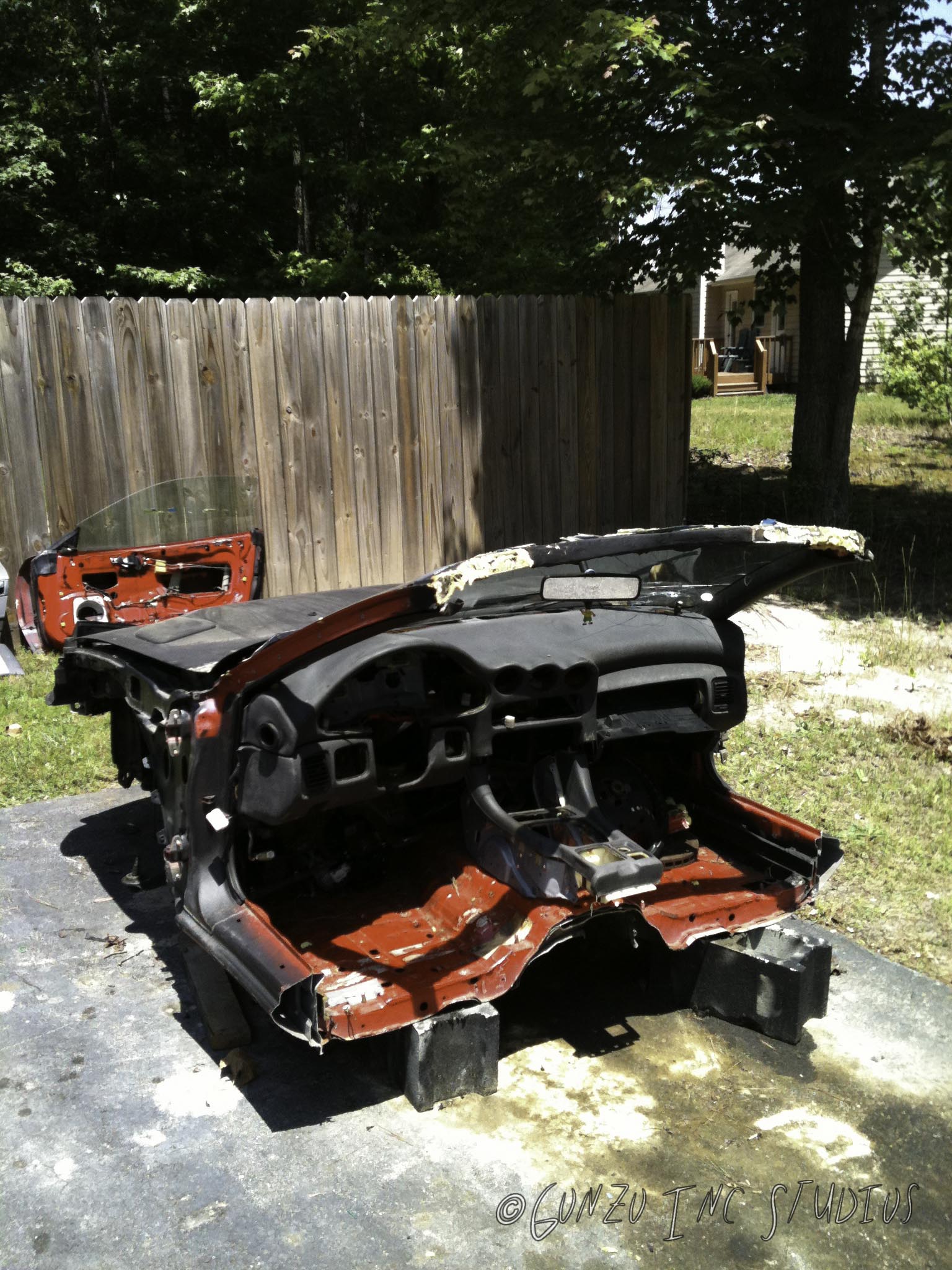 The lower frame rails already had C-channel welded down the length of them to stiffen things up for the targa top. So I just needed to cut out the floor pan back  to where the seat area was and finish boxing it in. This gave me a lower frame to build off. I needed something ridgid to weld the frame onto since the sheet metal was not very thick. Combination of square tube and angle iron was used. There was not a metal depot around me anywhere to buy steel from so everything I got was from Home Depot or Lowes. So I had to use what was available to me.

The doors would be reused but only half of them. So I measured out what I would end up filling in the sides, marked the doors out and laid down some painters tape as a straight edge to cut on. Using a combination of angle grinder and a sawzall I was able to cut the doors as I needed them to fit the sides. The vertical cut line on the door was not completely 90 degrees. It angles back some to assist in airflow as I didn’t want the front of the trailer to be a giant air dam. The half cut doors were latched into place on the stock door catches, shimmed into place using some metal flat bar, then the doors were welded into place 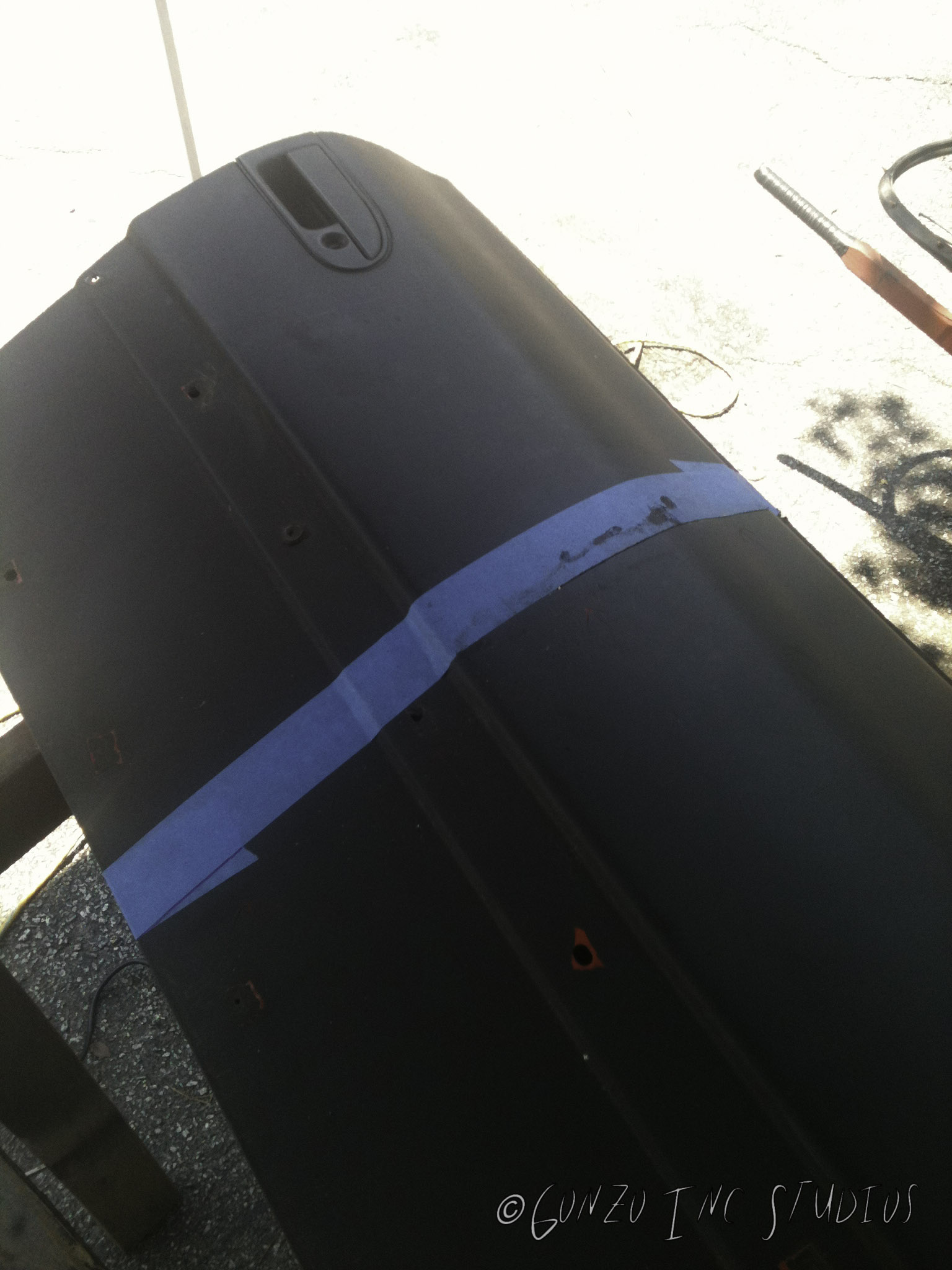 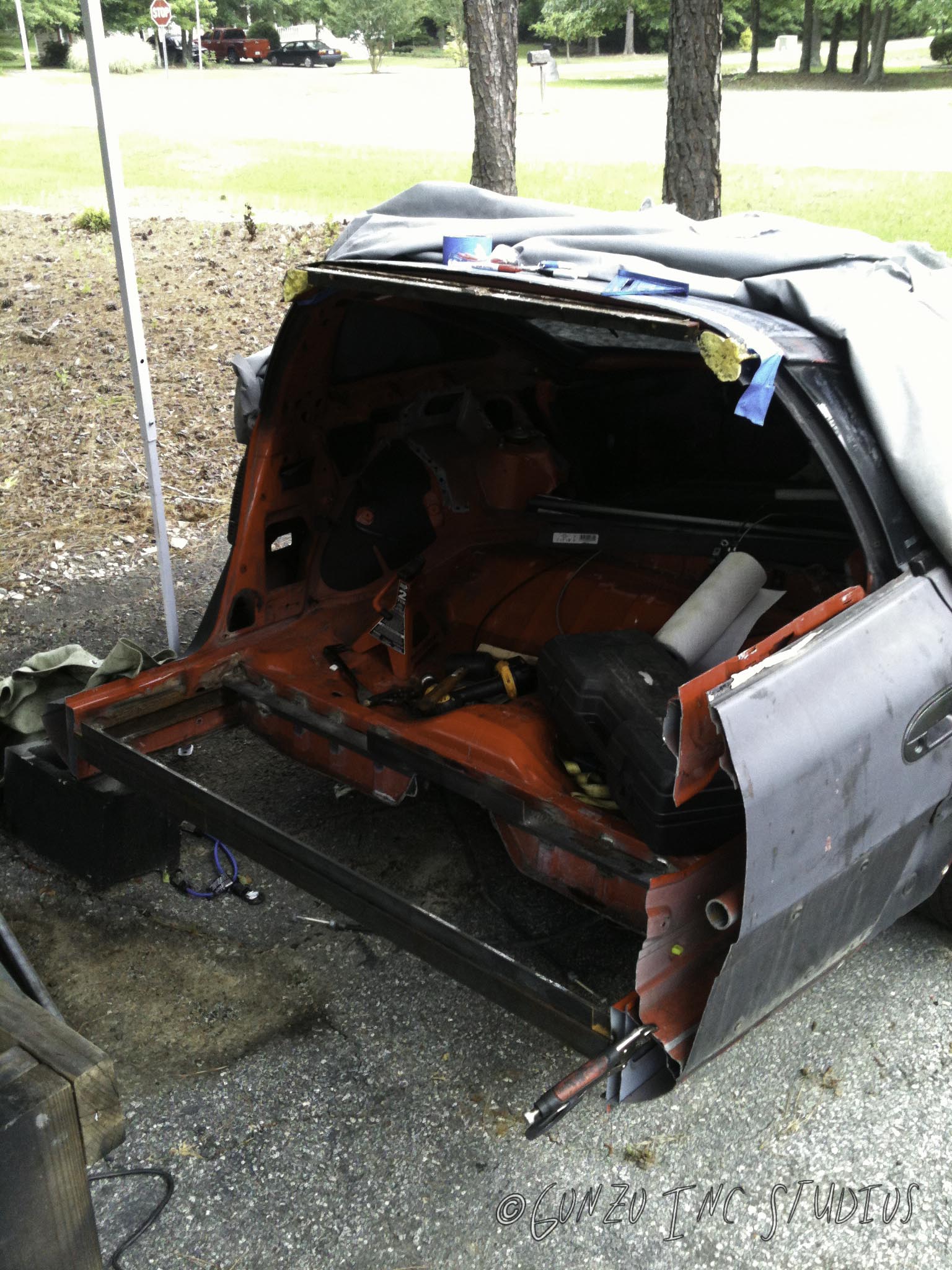 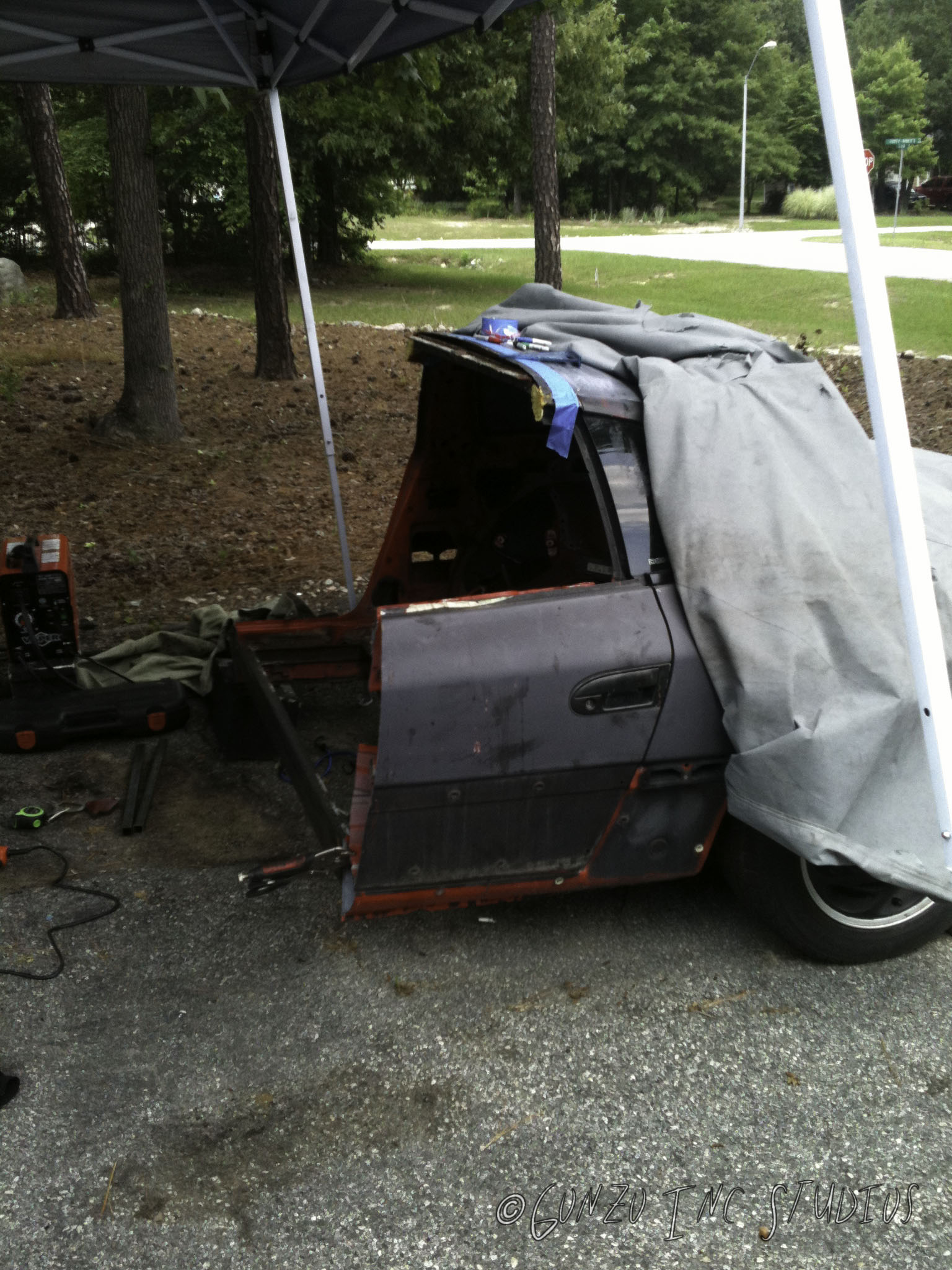 The rest of the frame was then pieced together using square tubing boxing in the middle section and then angling back to meet the roof line. The roof already had metal welded in place as part of the targa project so I just had to get the angles to meet up to that piece and weld it in place. You can see some of the spacer blocks that were welded into place to keep the door spacing between the skins in tack and the blocking used between the frame and the doors. All of that was added to ensure everything was solid. Even the round tube crash bar in the doors were eventually connected to the frame.

For the tongue I ended up having to order the steel online and have it delivered since I couldn’t find anything large or thick enough locally. It was a 2.5” x 0.25” square tube about 8’ long. The center tongue tube starts under the car at the subframe. I found a center point under the car, added in some 0.25” plates and bolted the square tube to it. The metal it’s connected to is part of the rear wheel subframe and by doing this it is basically making the tongue and wheels one unit and the body sitting on it. It’s as close as you can get to a body on frame when using a unibody car chassis. The idea was to ensure that the tow force is transferred to the rear subframe directly and not through the sheet metal body. Since the tube was only single bolted at this point I had a pivot point that allowed me to swing the tube tongue so I could center align it at the front of the trailer. Getting the tongue centered is the main thing I had to get correct on the build. If the tongue was not centered then the trailer could wander and fishtain on the highway. Once I got it aligned and secured I added 2 angle brackets running from the existing frame rails to the tongue at an angle. This reinforces the tongue and keeps it centered. I then went back through and welded everything heavily. 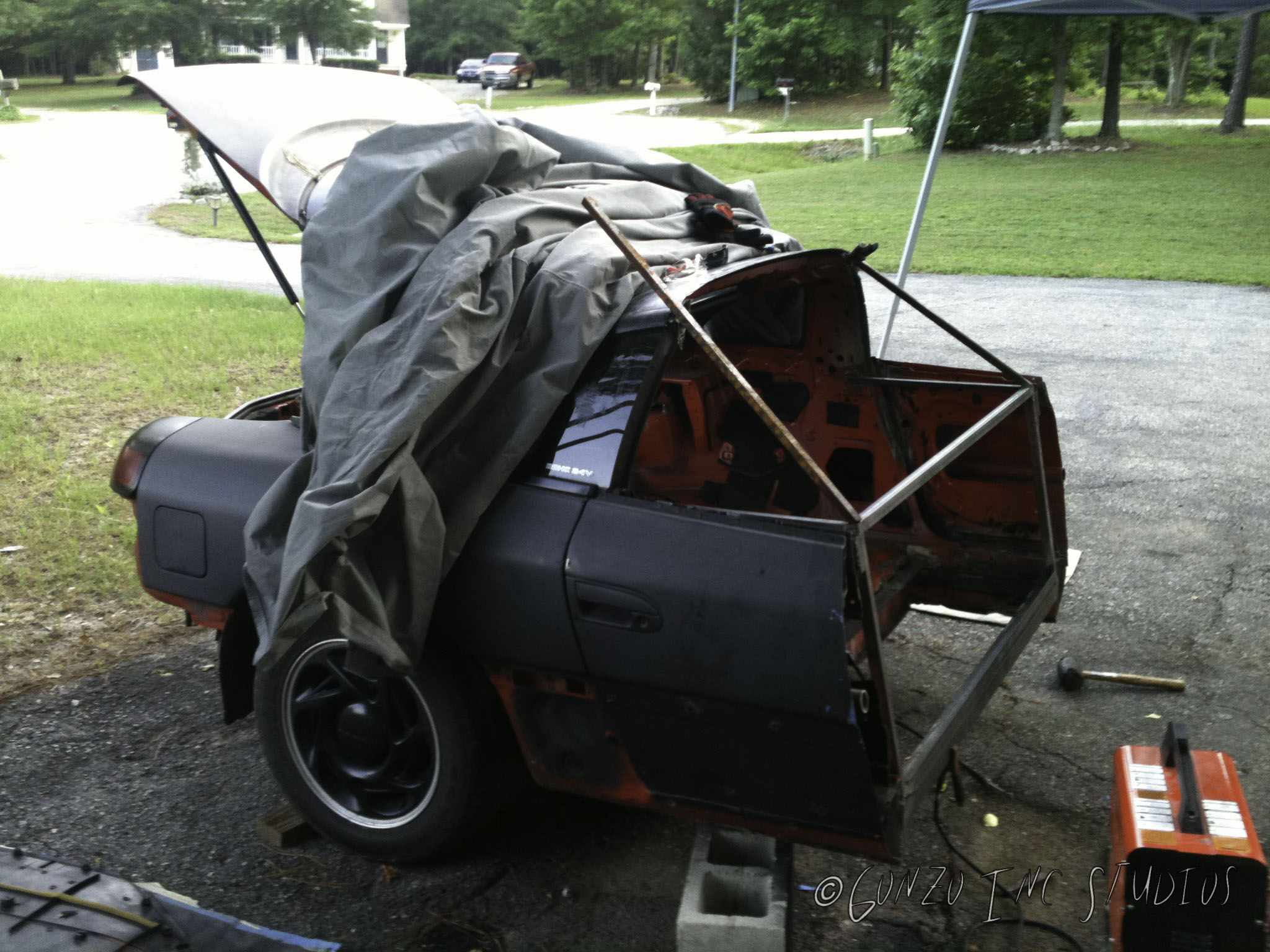 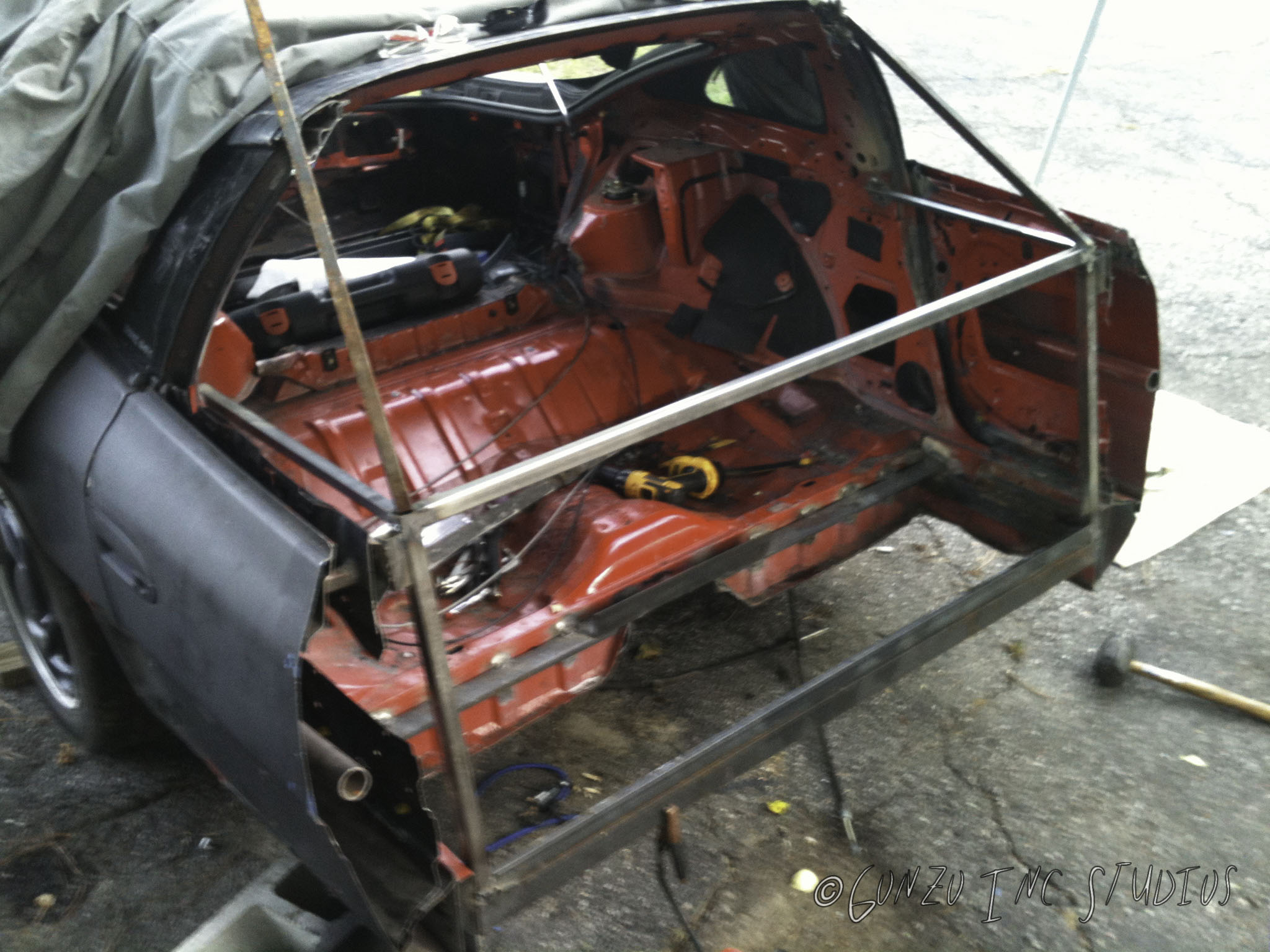 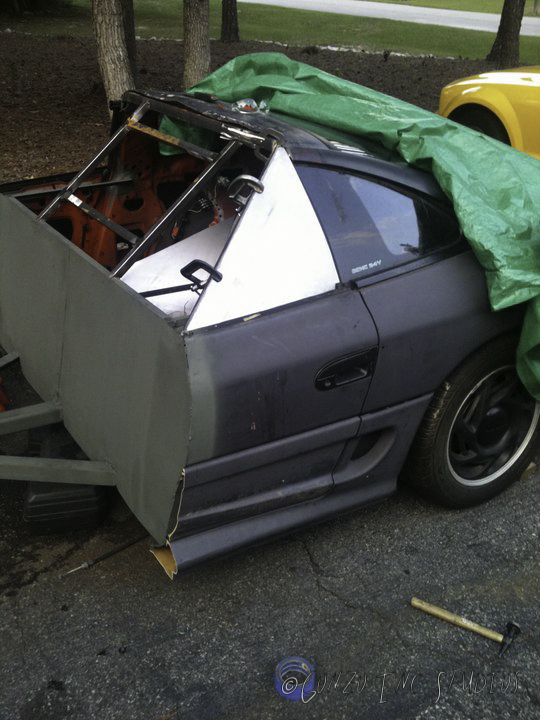 The sheet metal on this is probably the biggest pain in the ass. Mainly because I could get sheets large enough to cover the full areas so I had to piece them together and that my flux core welder didn’t do well with thin sheet metal. The lower center section was done in two sheets with a center seam. It was extended past the door cuts and tack welded. Body glass was used to finish the edges. I didn’t have enough supports on that lower center section so the thin sheet metal warped and waved really badly. Eventually it will be redone and possibly an access door will be added to that lower area as it’s almost impossible to store anything that far forward.

The upper angled area I had added in more supports and a frame to add an access door in the future. The sheet metal in this area came out much better due to that additional support frame that was added in. It still had it’s issues though mainly around the welder heating the metal up too much and warping it. The shoot metal to the roof area was hand bent some to better smooth the transition. Body glass was again added to help smooth things out after it was all welded up

On the inside of the trailer I added a battery that would be used for the electronics that would eventually be back there. I custom built the mount and wired in a keyless entry module and a popper to release the rear hatch since the only other way to get in it now was by using the key to open in.

The gas tank was removed and the top cut off and it was reinstalled, then the floor was cut out to accommodate the ice cooler that would go back there. This opened up a lot of room into the hatch area by sinking the cooler down into the floor how it was. Combination of metal and expanding foam was used to seal the area off from the elements under the car. The eventual plan was to build the floor so that it was flush mounted with the cooler so it was hidden. 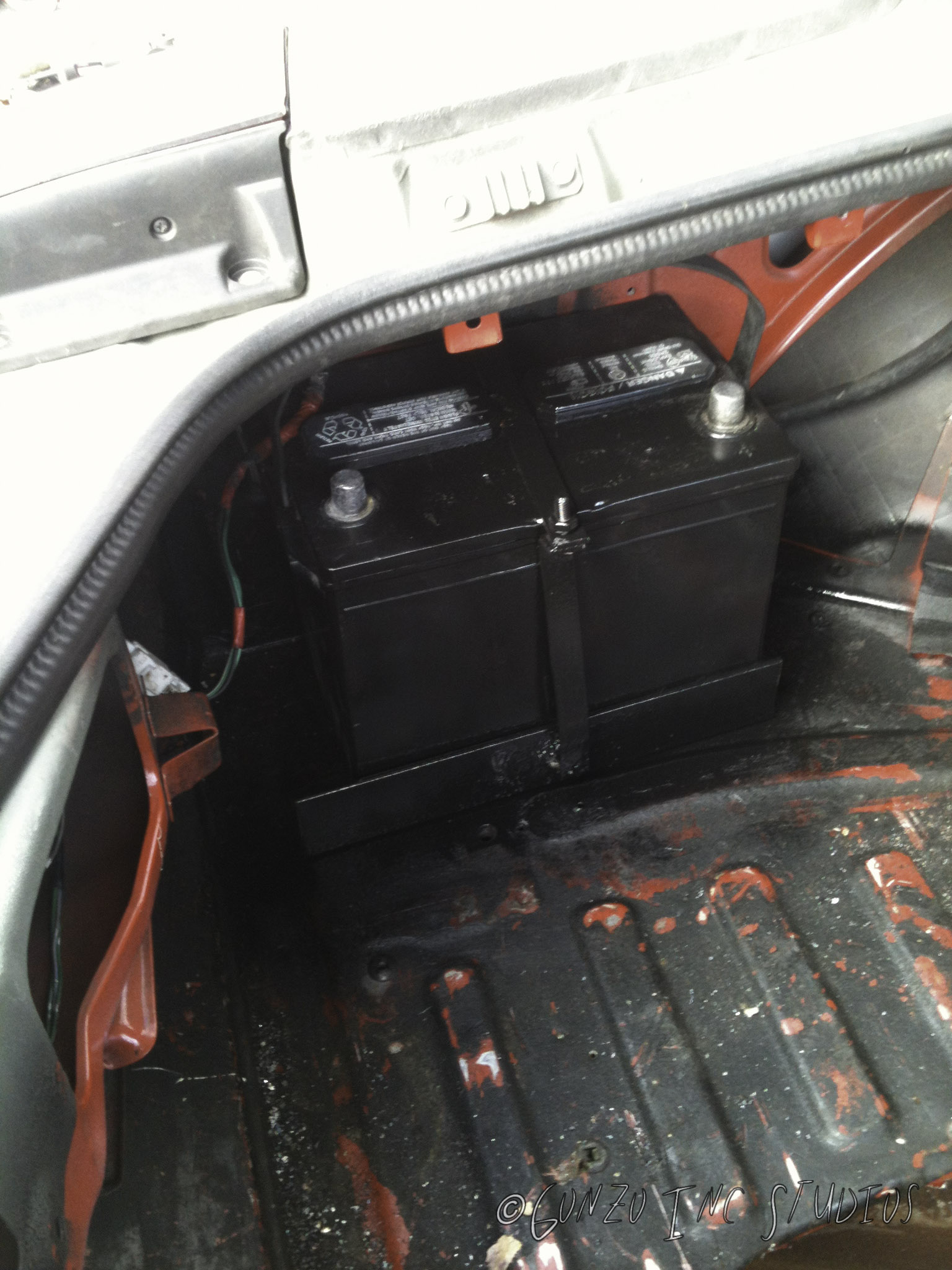 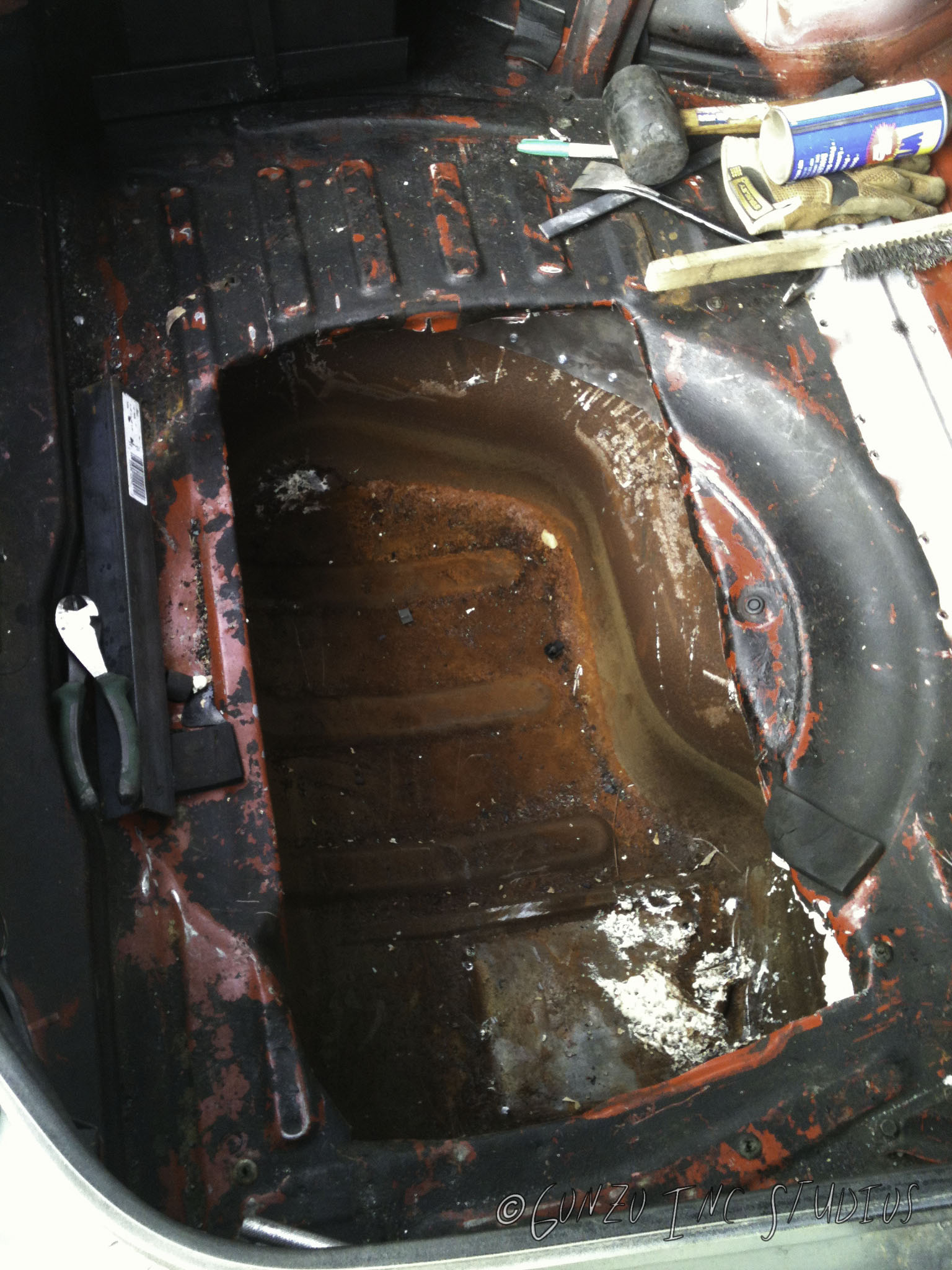 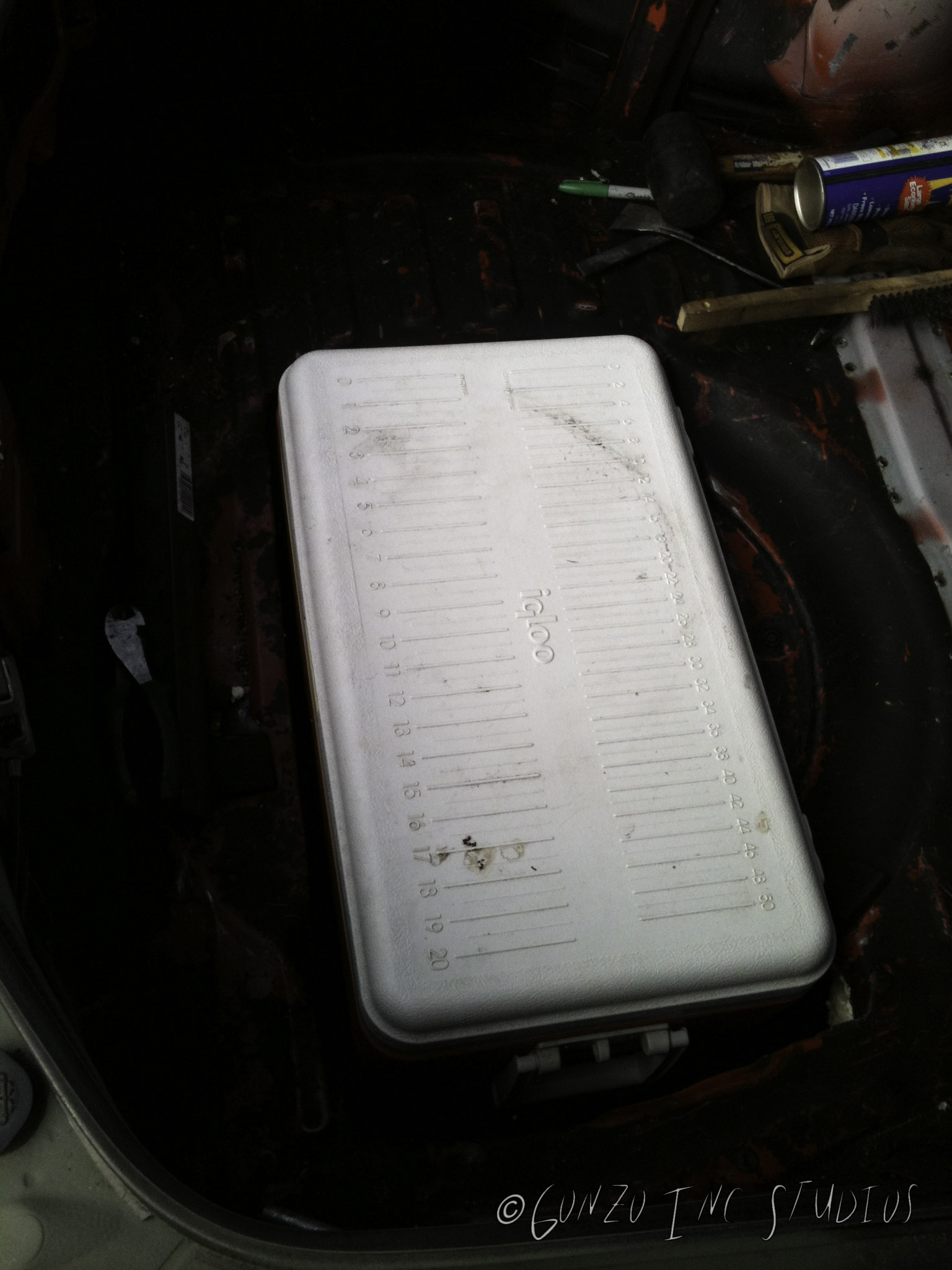 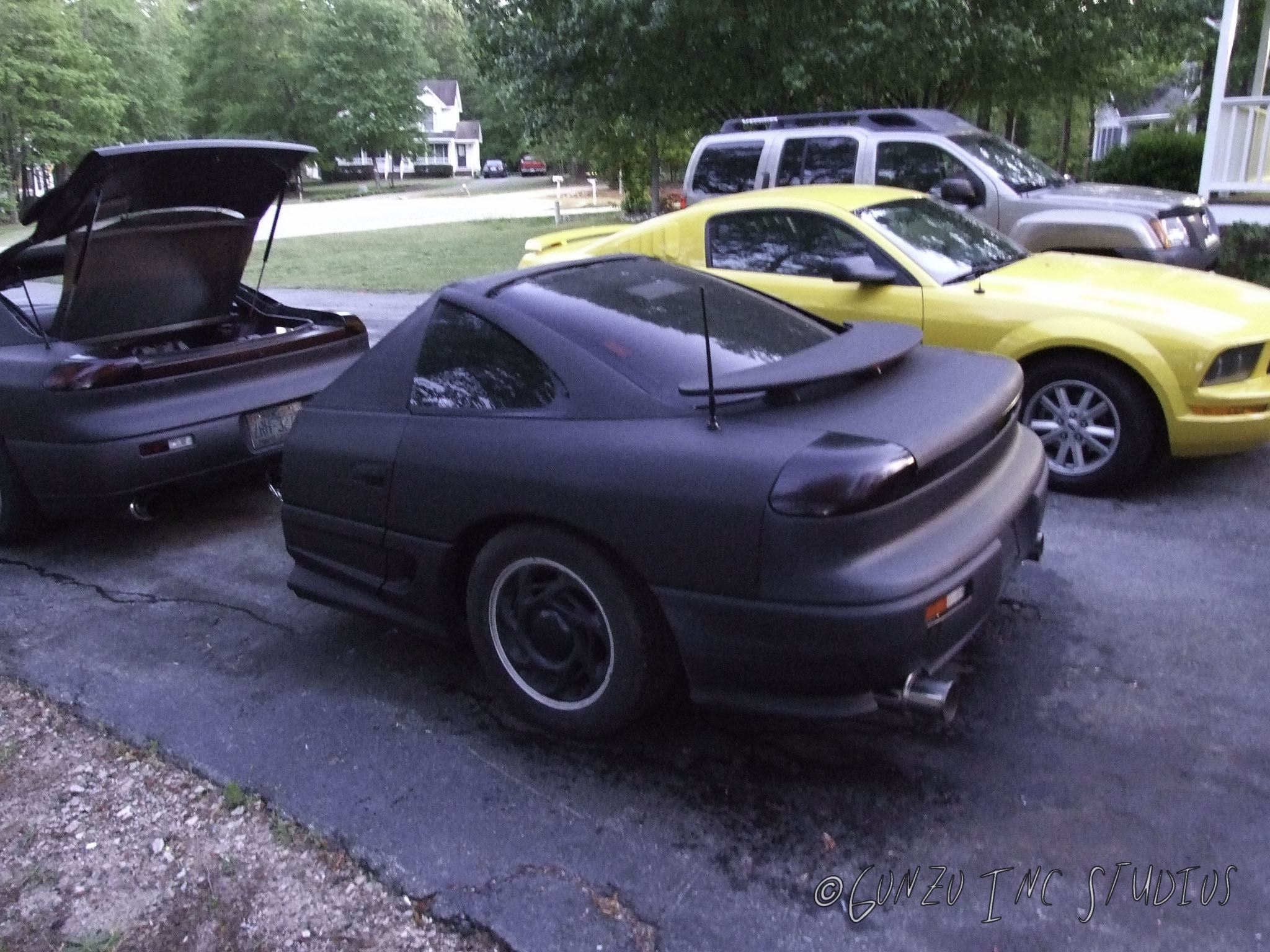 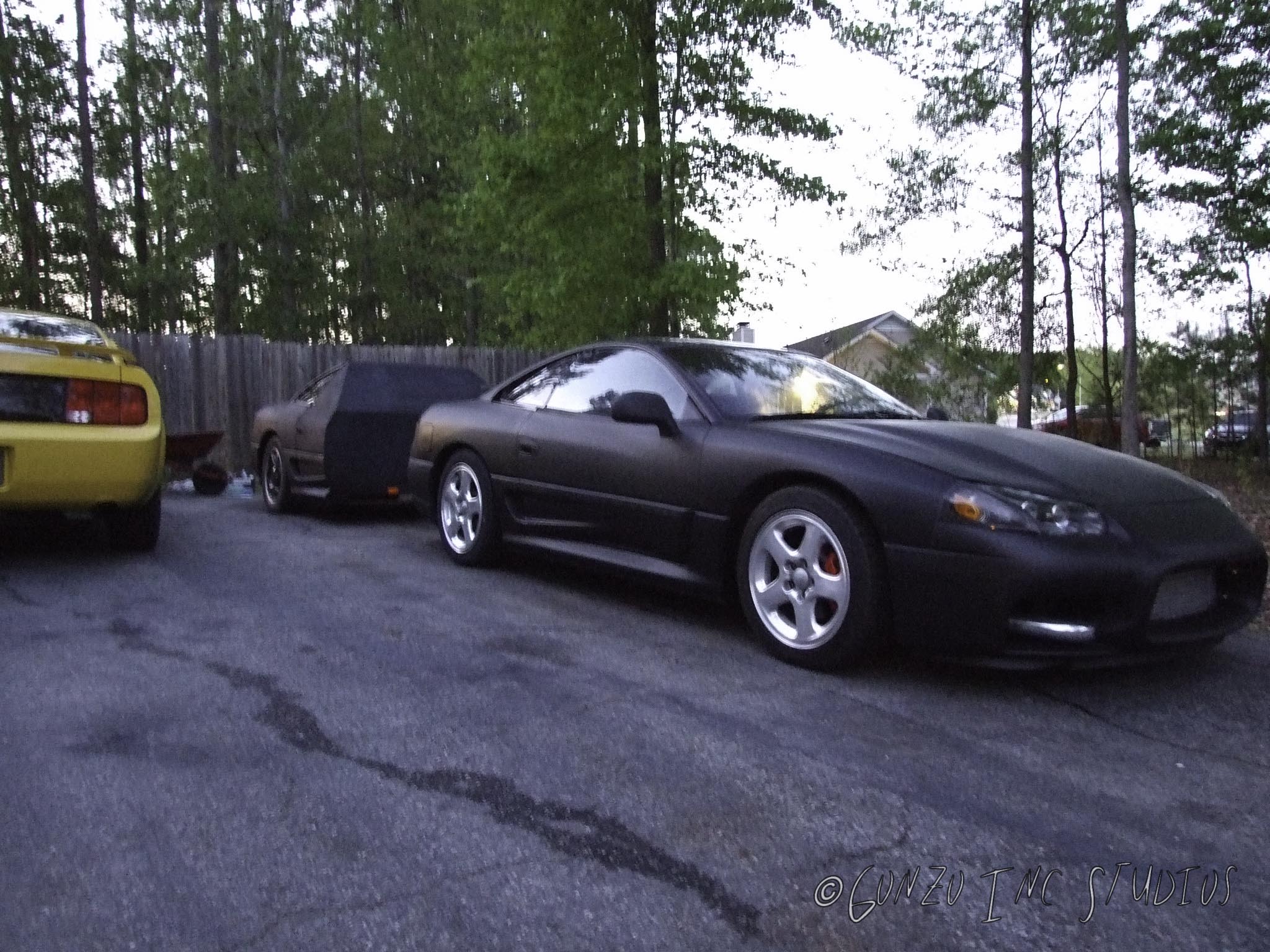 At this point the fabrication work was completed so it was time to knock out the body work. Side skirts were cut down and molded onto the body, window  trim pieces were cut as needed and installed and the rest of the body work was done in preparation for paint. The trailer was painted with just a black primer for the time being as I knew I wanted to come back and finish some things before doing the actual paint job. The taillights and the wiring were pretty much the same as a common trailer using a standard 4 pin trailer connector. The third brake light was a little tricky since trailer connectors don’t include them. So a fancy wiring circuit was built to get it working as it should.

That pretty much finalizes the initial trailer build. Since this was a custom built trailer I had to go through some hoops with the DMV to get a custom title and VIN number assigned to the trailer and get it registered. This also included getting the trailer inspected and having the new VIN number stamped onto the trailer tongue. It probably took me about 4 months to get the whole process completed here in NC, but it’s all done and road legal.

As far as pulling the trailer goes, you have to be very mindful of the tongue weight. The Curtis hitch is only a class 1 hitch and the max tongue weight is 200lbs, with the axle being back so far in relation to the tongue itself you can’t load down the trailer in front of the axle very much. I would say the trailer alone is probably at 75 lbs tongue weight with it being empty. I try to balance out the load in front and behind the axle which works pretty well as It’s more a tailgating trailer anyways.